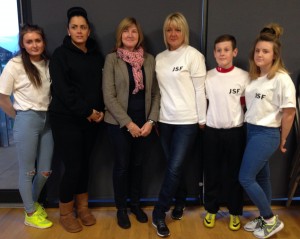 We are delighted to announce that the overwhelming generosity of fans, together with donations from players & management of both Spartans and Hibs Ladies, helped raise a fantastic sum of £922.50 for the Jamie Skinner Foundation at Sunday’s final SWPL game of the season.

Members from The Jamie Skinner Foundation met with Alison Johnstone MSP (pictured) who informed Foundation Secretary Karen Greechan that she had raised a Parliamentary Motion at Holyrood which will feature in Monday’s business.

“That the Parliament recognises the support of Spartans Women FC for the Shockingly Easy campaign to place life-saving defibrillators in sports clubs across the Lothians; commends the club’s gesture to donate the gate receipts from the Edinburgh derby match against Hibernian Ladies on 2 November 2014 to the Jamie Skinner Foundation (JSF); notes that JSF was set up in memory of the 13-year-old Hearts player who died following a cardiac arrest on the football pitch; considers Scotland’s sporting clubs to have a vital role in raising awareness of health issues and the importance of emergency response, and believes that, with its sporting institutions, communities and parties across the political spectrum working together, Scotland can make great strides toward preventing further such tragedies.”

On behalf of the Club, we would like to extend our thanks to everyone who contributed towards the tremendous figure and we wish the Foundation all the success in the future.