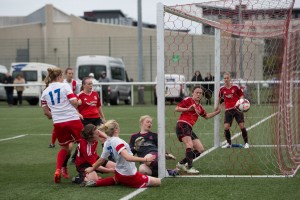 With two goals in her opening three matches, Mariel Kaney has made an instant impact since her pre-season move to Ainslie Park.

This weekend, Kaney and her new teammates take a trip north to face Aberdeen in the Quarter Final of the SWPL League Cup knowing a win will set up a Semi Final appearance on home territory, with Ainslie Park the venue for this season’s Semis and Final of the competition.

The 24 year old attacking midfielder, who moved across the Capital from Hutchison Vale, is pleased with the way things have progressed on an individual and team level so far.

“It’s been a great start for me personally and for the girls.  I’m just delighted to get off to a winning run and get full points on the board after the opening fixtures.

“Getting the early goals in too has been a massive confidence boost for me .  It’s a new role for me playing slightly higher up the park than I’ve been used to but I’m really enjoying it.  I think we are clicking as a team and the shape we are playing at the moment is working well for us too.”

Kaney netted the winner as Spartans defeated the Dons in the opening game of the new SWPL 1 format however the Law Student knows Sunday’s hosts will be a different proposition on their home ground.

The former Scotland u/19 Internationalist added, “It will be a different test for us up there. Everyone knows that Aberdeen are pretty solid on their home patch so it’s up to us to go and take the game to them.  We’re flying high at the moment and there’s confidence in the camp so it’s up to us to make it happen and progress to the next round.”

Spartans won their Round 1 tie delivering a dynamic extra time defeat to Stirling University – finding the net four times in the additional 30 minutes after the scores were tied 1-1 after 90 minutes.  Aberdeen scored as many goals in their opening tie, putting SWPL 2 side Jeanfield Swifts to the sword at home.

The game at Heathryfold Park, the home of Sunnybank Juniors, kicks-off at 1pm.