Keeper would glove another clean sheet as Spartans head North 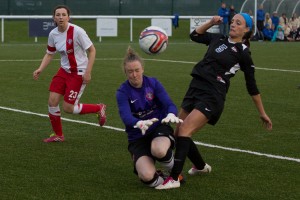 Spartans head to Aberdeen on Sunday keen to seek revenge for defeat in the League Cup on their previous visit to the Granite City.

Since then however, Debbi McCulloch’s side have hit a rich vein of form, finding the net no fewer than 35 times in their last four outings whilst conceding just three at the other end.

Two of these fixtures (Forfar & Inverness) have resulted in clean sheets for Spartans No.1 Rachel Harrison.

Harrison, recently called up to Anna Signeul’s Scotland training camp, is looking to add to her hat-trick of clean sheets so far this season against an Aberdeen side who sit once place behind the Ainslie Park outfit, filling the final Top 6 spot with four matches to play before the split.

The Spartans shot-stopper said, “Sunday offers us a great opportunity to head back up to Aberdeen to redeem ourselves after our narrow cup defeat.  Whilst we know from last time out that it’s not an easy place to go, we have been playing far better football since then.”

Spartans have only conceded eight goals this season so far, an average of just one per game and a modest Harrison noted the significant contributions those playing out in front of her make when talking about keeping clean sheets over ninety minutes.

“It’s vital for any goalkeeper to have a solid defence in front of them.  Winning starts by not conceding and if we can keep tight at the back, we know that the likes of Sarah Ewens up front and her wide players can cause havoc against any team in our league.

“Everyone is working hard for each other on the pitch and at training too.  With the depth of the current squad, there is definitely more competition for places and as a result, there’s a real buzz around the Academy at the moment.

“Whilst we may have won our last four games in a row, no-one is taking a Top 6 place for granted and we’ll have to go and put in a shift to come back down the road with three points.”