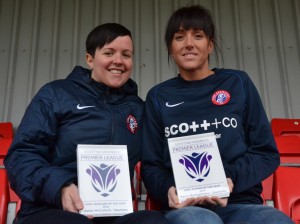 We are delighted to announce our award winning duo will be working together once again in Season 2015.

2014 SWPL Player of the Year Kerry Montgomery has put pen to paper for another season at Ainslie Park, her third under the stewardship of Debbi McCulloch.

McCulloch, last season’s SWPL Manager of the Year is set to unveil her 2015 squad early in January when pre-season gets underway in earnest.

Montgomery, who picked up the Award after being recognised by her peers as one of the outstanding talents of 2014, will re-join her team-mates next week after the close-season break as they begin preparations for the new season.