Lana looks to start the year as she means to Finnish 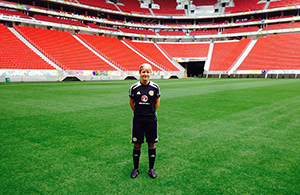 Spartans Midfielder Lana Clelland heads to Finland on International duty with the Scotland A squad next week as Coach Anna Signeul kicks-off a busy 12 months for her National side.

Speaking ahead of the trip to south Finland, Clelland summed up her pride in making the cut again as, “Unbelievable!”.

Clelland added, “It’s a privilege as always to be offered the opportunity to be part of the squad.  This has been my third trip with the squad since my recovery from injury last summer and it’s great to have the chance to travel and experience different cultures along the way.”

After the thrill of Brazil, it’s the chill of Finland for Lana, who scored in a pre-season friendly win against WSL2 outfit Durham and again in last weekend’s win over Hamilton.

As temperatures dip below zero, the match will be played indoors at the impressiveEerikkilä Sports Institute. http://www.eerikkila.fi/en

With its full-size football pitch with artificial grass, the Institute’s ‘Adidas-hall’ will host the game, saving the players from the bitingly cold elements outside.

It’s not the first time Lana has played in the Nordic nation.  In September 2011 she played in a 1-1 draw in the Scotland U/19s UEFA European Championship qualifiers, a tournament that saw her score 9 goals, including hat-tricks against Faroe Islands and Belarus.

The match, which kicks off at 4pm local time on Thursday 13th February, will form part of Scotland’s preparations for their FIFA Women’s World Cup clash with Poland on Saturday, 5th April.