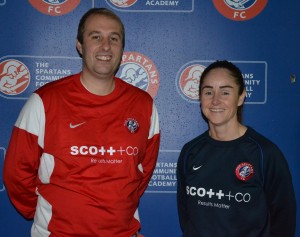 Suzy Shepherd has made her first signing as Spartans Manager by bolstering her backroom with the appointment of Ian McDonald as 1st Team Coach ahead of the 2016 SWPL 1 season.

McDonald makes the short move across the capital from Hutchison Vale Ladies and the former professional footballer is relishing the opportunity to work with Shepherd once again.

The 37 year old said, “One of the main things that appealed to me was working with Suzy again and I welcome the challenge that lies ahead for both of us. We are realistic in our expectations however the plan is to build a team challenging for the silverware each year.

“In addition to this, it’s also important to develop the player pathway. It is fundamental that we look to nurture and grow our own talent in order to allow Spartans players to flourish both within the club itself but also to allow more scope for greater exposure within the Regional and National channels.”

The former Hibs, Clyde, Cowdenbeath, East Stirling and East Fife man is no stranger to the Spartans Family; his Brother-in-Law Eddie Malone plies his trade in the Men’s Lowland League team. His connection to the club also extends to having been at Easter Road during John Ritchie’s time as Goalkeeping Coach.

When his career as Centre Half was cut short due to injury whilst at Bayview in 2005, he took some time out from the game to work on his golf handicap before being introduced to Coaching by former Hibs colleague Keith Wright.

During a three and a half year spell with Hutchison Vale as Head Coach, McDonald made what was seen as a bit of a coup at the time for the club by signing the then Suzy Robertson who arrived with an extensive football playing CV under her belt. After helping guide the team to promotion, McDonald stepped down and made the transition once again back to the Men’s game, this time as Assistant Manager at Bathgate Thistle.

After a season with the West Lothian outfit, it was back to Women’s Football last year. The return to the SWPL was an easy decision for McDonald to make.

“I genuinely find it more enjoyable coaching in the Women’s game. Players are more willing to learn whilst the passion and commitment to work hard and improve as individuals is incredible.”

Welcoming McDonald to the Club, Shepherd said, “Ian is an experienced coach and one that I have a lot of respect for. Added to that, he has played his football at a high level and has worked in both the Men’s and Women’s game for several years.

“Ian will bring a lot to Spartans and I am delighted that he has accepted the role and I look forward to working with him.”

Pre-season friendlies ahead of the 2016 SWPL 1 league campaign will be announced in due course.