Maroons get the Blues – of the Spartans u11s variety! 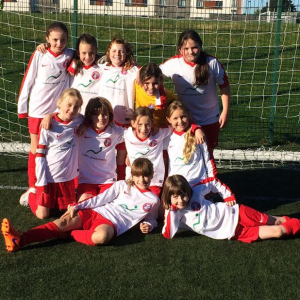 The big game in the U11s Development League took place at Ainslie Park at the weekend. The autumnal / wintry start to the warm up ended with great sunshine by the end of it as spectators looked forward to feast of football that lay ahead.

The Blues have enjoyed some great results recently, but were still slightly worried as Hearts are always very strong.

However, the game turned out to be very different. The young Spartans team (including girls who could still play for U9s) got off to a great start and two goals from Natasha in the first 15 minutes set the tone of the morning. Halfway through the second fifteen, with the Blues 5:0 up (goals form Sophie, Lily and an own goal from a Hearts defender), Hearts put on an extra player, but the goals kept on coming.

The extra player worked for a short period and the visitors managed to score twice, but Ava, Dora and Rona went on to score one each for the Blues who went on to record an emphatic 8:2 win.

The U11 teams have benefited a lot from training twice a week with a committed coaching team.  The improvement has been amazing with great individual skills combined with some beautiful passing moves that are a joy to watch.

The players (36 girls now play in the age group) get on very well off the pitch, too. After the game, most players headed to Sainsbury’s to complete a day of bag packing to raise funds for future events, tournaments and projects.

They are also looking forward to being the ball girls at the Scotland vs. France Women U17’s UEFA qualifying match (the first international qualifier ever hosted at Ainslie Park) on Saturday, 15 October and then hosting a small tournament a week later.

The featured image is the team photo.  Well done to Natasha, Dora, Lily, Marie (GK), Kianna – Rosie (C), Cara, Sophie, Ava – Freya and Rona.  Thanks to Zsolt for the report!