Marshall on a mission to keep on winning 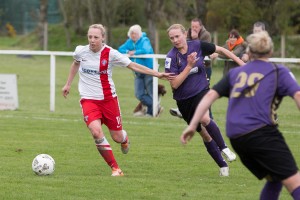 It’s back to action this Sunday when Inverness City make the trip to the Capital as the SWPL season reaches Round 7.

Spartans will be keen to continue where they left off before last weekend’s rest day, a 2-5 win on the road in Buchan and Manager Debbi McCulloch is calling for more of same from her side.

“I was impressed by the team’s character up in Buchan. The long drive, unfamiliar grass surface and a physical game making it a testing trip however we dug deep and came away with three points.

“On Sunday, the team know what is expected of them against an Inverness side that I’ve got a lot of respect for on and off the pitch.  The girls have been working hard this week in training to ensure we continue working on what we’ve been building over the season so far.”

Back to back wins have seen Spartans move up to 5th and Alana Marshall is keen to keep on picking up the points in order to finish inside the top half of the league table when it splits at the end of June.

Marshall, four times capped for Scotland, is itching to get back on the park, “I can’t wait for 1pm on Sunday as I hate having time off from playing – it’s so frustrating for me.  Anyone who knows me will know how much football means to me and !

“After two wins on the bounce, I’m keen for us to continue that momentum and consolidate our place in the top half of the table. We’ve scored 21 goals over our last two games which is no mean feat in itself and shows our intent to go better than last season’s finish.

“Sunday’s game will be a tough one though against Inverness who were promoted last season so they are a bit of an unknown entity to us and we’ll have to be firing on full cylinders in front of our home support to win another 3 vital points.”

The match kicks-off at 1pm on the Ainslie Park Stadium pitch.