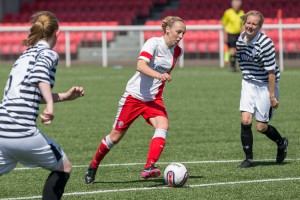 Alana Marshall is focussed.  The attacking full-back has just finished her second training session of the week as her side homes in on Sunday’s Scottish Cup Final showdown against Glasgow City at Broadwood Stadium.

“Training has been immense over the last couple of weeks.  Debbi has been working hard on her homework and our game plan is coming together quite nicely out there during the sessions.  There’s a real sense of togetherness – a determination to win and win well.”

As a teenager, Marshall had her first taste of the ‘Cup Final experience’ when she collected a runners-up medal at Under 17 level with Falkirk in 2004.   Ten years on and last season’s Team Player and Players’ Player of the Year is back on the trophy hunt.

“We have shown already this season that Glasgow are beatable however, as anyone will tell you, Scottish Cup games are so different to any other kind and with it being the Final, all form goes out the window.

“Yeah, the record books show they’ve won it six times over the last decade and they will go in as favourites however we’ll be heading out on the pitch full of confidence and certainly won’t be letting any ‘first time underdogs’ tag get the better of us.  In the Cup, everything is possible.”

Marshall’s first attempt at lifting a trophy in Spartans colours came in her inaugural season at the Club after joining from Rangers.  “We played City in the League Cup Final at Alloa and we lost out.  Even though I hadn’t been a part of the club for as long as many of the others that one really hurt for me.  As anyone who knows me will tell you, every game means a lot to me – even the bounce games at the end of training!”

When you speak to Marshall, there’s an indescribable passion for the game in her voice.  The 27 year old eats, sleeps and breathes football.  Just how would winning the Scottish Cup at the first attempt with Spartans feel for the former Scotland A Internationalist?

“God – it would be amazing.  I love it here at Spartans and to be a Scottish Cup winner with the club would be a dream come true. You always have these goals growing up as a kid and this is one that I can genuinely say was one of my biggest ones and I’ve not done that – yet!  To achieve it would be thrilling for me, as you don’t get many opportunities to have a crack at it.”