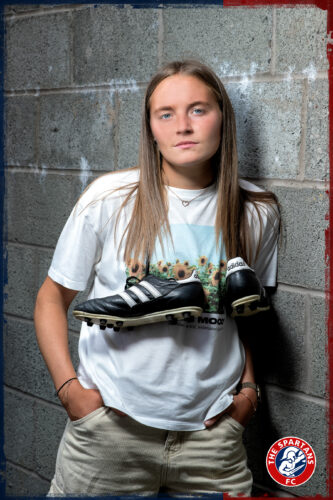 On signing a two year deal, McCafferty commented: “I’m really excited and extremely grateful to have the opportunity to sign a semi-pro contract with Spartans. From the moment I walked through the door I knew how special this club is.  I’m delighted and very proud to be continuing my 3rd season in SWPL 1 at Spartans.”

Having played in all 21 SWPL 1 fixtures last season, Robyn is fully aware of the demands expected at the top level of Scottish Women’s Football. She said: “I’m really looking forward to the season ahead. We have an exciting and talented group of players here at Spartans who demand the best from each other on and off the pitch. We are looking to kick on from last season as we want to improve and compete at the highest level possible. Everyone within the team firmly believes we can achieve more than last season.”

Spartans Manager Debbi McCulloch commented: “Robyn is a dream to work with on and off the pitch and a player who has a very bright future ahead of her. Nothing fazes Robyn. She is always willing to give 100% for the team and we look forward to further developing Robyn into one of the best central defenders in SWPL 1”.