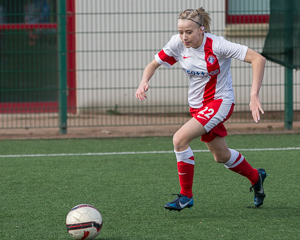 Spartans welcome Glasgow City to the Academy on Sunday in the third weekend of fixtures in what’s already shaping out to be an exciting SWPL season.

With a maximum of six points each earned in this campaign so far, both teams will be out to preserve their unbeaten SWPL record.

Last season saw City come away with full honours, including a 1-3 win in the corresponding fixture at the Academy last March.  Ahead of Sunday’s lunchtime showdown on the Stadium Pitch, Spartans Manager Debbi McCulloch believes her side has what it takes to continue their winning streak come the final whistle on Sunday afternoon.

“We picked up an important point on the road last week against Rangers but in doing so, we also came away with a couple of unhelpful knocks, including a sore one for Suzy (Shepherd).  Thankfully, we are able to welcome back into the squad a couple of players who have been side-lined through injury of late.

“We’ve had three good training sessions this week and we’ve worked hard on how we are going to play our game.  As long as we stick to our key roles and responsibilities as a team over 90 minutes, then we’ll be on our way to keeping our undefeated record intact.”

City come to Ainslie Park on the back of a 4-1 win over Hamilton seven days ago.  With a treatment room already resembling Emergency Ward 10, our visitors don’t have their injury troubles to seek in a squad that is ‘severely hampered with countless injuries to key player’ according to their website report from last Sunday’s game.

For McCulloch, her primary focus is with the task in hand of defeating last season’s league champions.

“A lot has been said about changes in playing personnel at City however these things happen in football as new players come and go, year in, year out.  I think you just need to concentrate on yourself at times as too many folk read too much into it what’s happening elsewhere.”

Former Scotland U/19 player Steph Briggs added, “There is a great buzz around the changing room going into the game on Sunday.  Team morale is at a high and we’ve had a good week on the training pitch and I’m confident that we can continue our impressive start with a win against City.”

Sunday’s game will also see prolific striker Sarah Ewens become the latest Spartans Centurion.  Ewens is set to play in her 100th game for the Club in which she has found the net a fantastic 75 times.  Well done, Sarah!

The game kicks off at 1pm (Please remember to put your clocks forward tonight!). Admission: £5 Adults, £1 Concessions, Under 16s Free