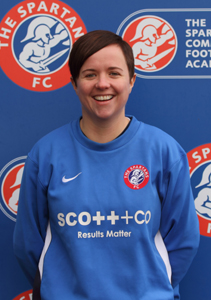 “Debbi is a massive influence around the Club. Her commitment, her passion and her love for the Spartans brings it out in us all.”

Louise Mason was one of a handful of players and backroom staff to show their gratitude for Debbi McCulloch who took charge of the SWPL side for her 125th competitive match as Manager against Aberdeen in the 4-1 Scottish Cup Semi Final win.

It is somewhat ironic too that Debbi celebrated this occasion against Aberdeen. Her first ever game in charge was on the road to the Granite City back on the 25th April 2010, where her new charges were 3-0 winners at Lochside Park, Bridge of Don.

McCulloch graduated from Abertay University In 2002 with a BSc (Hons) in Sports Development with Coaching which led Debbi into a career of football development and coaching.

Beginning her coaching career at Dundee United Football Club as a Community Coach, Debbi arrived at the Spartans Community Football Academy from Ross County to undertake the role of Football Development Officer. 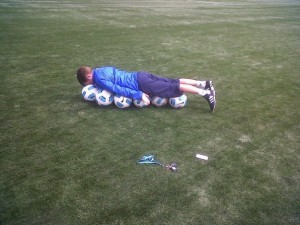 Qualified to SFA Level 4 in both Children’s and Youth coach education pathways, Debbi became involved with the Spartans SWPL team in 2009 as Assistant Head Coach before progressing to become our Head Coach in April 2010.

Since taking over the reigns as 1st Team Manager at the end of 2012, Debbi has led her side to two League Cup Finals and the runners-up spot in the 2011 SWPL campaign.

Undefeated in their last five matches, the momentum is with McCulloch and her team who are preparing for the remaining two games of the season, against Hibs in the SWPL and Glasgow City in the prestigious Scottish Cup Final.

The tale of the tape so far: 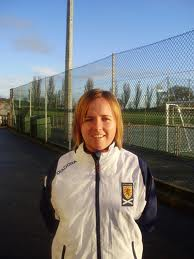 As anyone who has observed a passionate and at times animated McCulloch either at training or during ninety minutes on a Sunday knows, ‘The Gaffer’ strives for success on and off the pitch at Ainslie Park, a point echoed by several of her Spartans colleagues earlier this week.

Head Coach Mike Ross,  “Debbi gave me an opportunity to be involved with Spartans 3 years ago. The 3 years have flown by and the understanding between us as coaches has really grown which I believe has seen the players and club improve.

“As a coach it’s important to work with others who allow you to keep learning. I feel we have both learnt off each other and developed as a result. As Head Coach and Debbi as Manager – we both deliver sessions but Debbi deals with majority of player daily player management.
“Debbi has really improved as a coach and put in the hard work to plan, prepare and deliver what she sets out to do. Her experience in  the women’s game allows us to prepare for opposition in great detail. She has done extremely well as one of the few female managers to consistently improve the team and as a result, this season has been my most enjoyable with the club.”

Captain Katie Reilly said, “I’ve played under a few managers, but never someone like Debbi. She allows you play with a lot of freedom and I’ve learnt a lot about the game from when I join Spartans.

“It’s all very positive around the Club at the moment and I think it all stems from Debbi – it builds from her as Manager and feeds into the changing room. What we can see right now is that the amount of work put in over the last couple of years by Debbi since she took over the hot seat is starting to come to fruition now.” 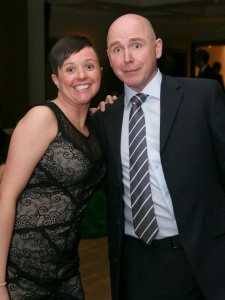 General Manager Carson Ralton, one of the catalysts behind Ladies football at Ainslie Park commented, “At Spartans we feel it is important to encourage women to fill pivotal roles in their own game and will always try and promote females when ever possible. When we started at Spartans in 2008 we were fortunate to secure the services of Shelley Kerr as Manager and of course we know how well Shelley has progressed in the game with Scotland U19’s, Arsenal Ladies and now the first female to manage a men’s senior club – we are rightly proud of Shelley’s achievements.

“When Shelley stepped down to concentrate on her role within the Scottish FA, Walter McGill (pictured right) and I knew that Debbi had all the credentials to continue the good work that Shelley had started and did not hesitate to offer her the lead role. Over the last four years Debbi has proved how right that decision was. I have watched Debbi mature and develop as a coach and I am certain that there is no one better within the Premier League.

“I think in the past Debbi has not always been given the credit that she deserves.  A great deal is due to the effort and determination of Debbi, her preparation for games and attention to detail is superb.  Some will notice that at Spartans we don’t have a high turnover of players, there are reasons for this and the level of coaching and management of players is high on the list, ensuring that once you arrive at Spartans you don’t want to go any where else, it’s a good place to be.” 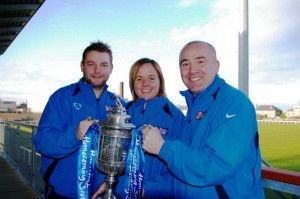 Goalkeeper Rachel Harrison smiled as she quipped, “Debbi is pretty loud and she’s also quite snappy but she’s also very effective with it too!” The shot-stopper added, “In all seriousness, Debbi has her way of doing things but she likes to get things done. The girls in the changing room have a huge amount of respect for her in the way that she has let us play this season. Debbi may have changed the formation a few times however she wants us to go out on the pitch and express ourselves and she lets us do this. She’s a top gaffer!

“Debbi can be quite hard on me – but I know she’s only like that because she cares and she wants me to reach the best that I can. I appreciate everything she has done for me personally and hopefully she’ll continue to support us all in the future.”

One player who been an ever present during McCulloch’s reign so far, is Claire Crosbie. Just how big a person did Crosbie think Debbi was around the place and what kind of impact has she had on the team since joining?

Claire Crosbie replied “From a selfish point of view, I know I wouldn’t be the player I am today without Debbi. Her assistance, support and guidance following my injury has been second to none and I am grateful to her for this.

“In terms of the last couple of years, the way the team has played under Debbi has been fantastic and it can only be onwards and upwards from here.

“Her passion and love for Spartans is incredible as well. Debbi is always worried about other people instead of herself. Her mantra is forever ‘do it for the Club’ and nothing’s ever ‘do it for me’, but as players we need to realise that we do need to do it for Debbi. She puts her faith in us every week and we will go out on a Sunday to repay that with a win.

“With two big games ahead, that’s exactly what we are setting out to achieve, first of all against Hibs to help secure second place, then Glasgow City, where we will be going out to lift the Scottish Cup next month at Broadwood.”