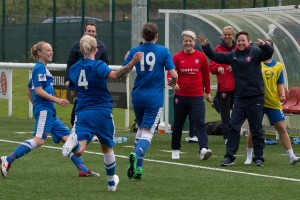 Spartans Manager Debbi McCulloch has spoken of her delight at having Sarah Ewens continue to spearhead the SWPL side’s attacking force as the sensational striker pledges another year at the Ainslie Park side.

With 102 in just 121 appearances, Ewens’ unique pathway to goal has saw her become only the second player in the team’s history to break through the hundred goal barrier.

McCulloch said, “Sarah is one of the best players in the SWPL and her goal scoring record speaks for itself.  Since Sarah joined in 2009, we have saw her develop in not only football terms, but as a role model for others around the Academy.  Her desire and determination to succeed is evident in her commitment at training and the match days and I’m delighted that she is keen to get going in what will be her 7th season at Spartans.”