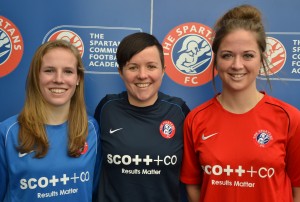 Spartans Manager Debbi McCulloch has unveiled two close season signings as the SWPL Manager of the Year begins her preparations for the 2015 campaign.

With a 4th place league finish and an inaugural Scottish Cup Final appearance in 2014, McCulloch has bolstered her squad with two exciting new recruits in Michelle Russell and Nicola Mawson.

Michelle Russell has made the move across the Capital from Hutchison Vale Ladies.

The 24 year old striker, who scored twice during the meeting between the two sides at Saughton in June, is keen to get in on the goals for her new side when the season kicks-off next March. 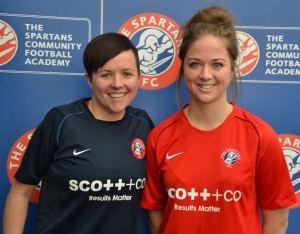 “I’ve had 17 great years with Hutchie however I’m really looking forward to this new challenge and to be working again with Debbi. To have the opportunity to come to a Club with such fantastic facilities is a major draw for me and I am also focussed on my personal improvement too, something I feel coming to a team such as Spartans will help me to achieve.”

McCulloch is delighted to have the opportunity to work with Russell once again, “I worked with Michelle when I first arrived at Spartans at the Regional Academy with the SFA and I also had her in my team when I was the Manager of the Scottish University side several years ago.

“We spoke to Michelle and she really wants to challenge and improve herself as a player.  She has a hunger for being a winner and certainly knows her way to goal – as we found out during last season’s game at Saughton!

“I’m really looking forward to seeing Michelle and Sarah Ewens work together next season as I feel both players will be able to compliment each other well, whilst giving the team more flexibility and options around formation and personnel within the squad.” 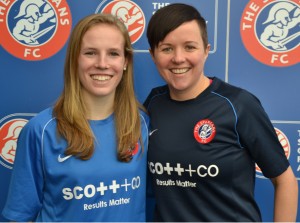 Canadian Nicola Mawson is the second new player to put pen to paper over the last few days.

The 18 year old Veterinary student from Vancouver has impressed Mike Ross whilst she has been playing for the Edinburgh University’s side, where he is Head Coach.

The former Whitecaps FC player was part of her Club’s Elite Program before making her move to Scotland.  Former Coach Jesse Symons said of Mawson, “Nicola has excellent motivation that really helps her not just in the game of soccer, but academically.  With her motivation and work ethic level she will do well in anything she engages with.”

Mawson said of the move, “It’s really exciting to be able to play at such a high level over here.  I wasn’t sure if I would be able to do that however, it works out really well playing with the University and I enjoyed training with the SWPL squad at the end of last season.

“I’m looking forward to be able to play as much as I can and raise my game next year and beyond that – enjoy it.”

Manager Debbi McCulloch said, “We’ve got a link with Edinburgh Uni with Mike being the Head Coach and it allows us the opportunity to have a look at players.  Nicola has come in and has been training with us over the last three months and has impressed us thoroughly.  She can play full back or centre midfield and just like many Canadian footballers, she has a fantastic engine on her.  What’s different about Nicola is that she is technically very good, fast and she has fitted in here extremely well.

“We are delighted that both players have chosen to become part of the Spartans Family.   We want to be compete next season as finishing 4th isn’t good enough for us at this club.  We want to be challenging  and there are a few key signings we are hoping to make before Christmas that will give us the capability to push on, move forward and be stronger than ever.”