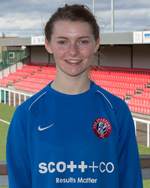 Walter McGill’s side were keen to get back to winning ways and were forced to come from a goal down to secure the three points to remain in 3rd place.

Miscommunication between defender and keeper allowed a South striker to nip in between the pair before nicking the ball and stick it in an empty net.

Spartans responded in quick fire fashion with a double from Cunningham. The youngster, who has featured this season in Debbi McCulloch’s SWPL side, turned possession into goals to turn things around.

It was hat-trick heaven for the Cunningham as she looked on to see her speculative shot squirm under the South keeper and crawl over the whitewash to put her side 1-3 up at the break.

It was to pay dividends as the tenacious Lyon grabbed a brace as Spartans continued to dominate throughout, whilst Sturrock provided the cherry on the cake with a goal on her comeback from injury.

Speaking after the game,  Nichola Sturrock was delighted to be back playing after a two month lay-off whilst she also paid tribute to the quartet of u/17s who featured in the win.

Sturrock said, “I’m delighted to be back with the squad on match days – it’s been a frustrating 9 weeks for me, as I’ve been fortunate enough to evade injury until now.

“I wasn’t expecting to be back until September at the earliest so to get a good 30 minutes under my belt on Sunday was pleasing.”

Player / Coach Sturrock added, “We had 4 of our u/17s playing, for two of them, this is their first season at 17s, so to see them step into the reserve team starting line up is fantastic. Not one of them looked out of place and they all looked very comfortable throughout the game.

“It’s a promising sign of the youth product we have coming through and reflects the hard work that has been ongoing throughout the girls youth set up in previous seasons.”