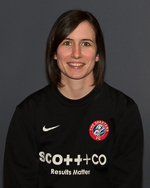 Eight strikes from Laura McRitchie and a six goal haul for Nichola Sturrock set Walter McGill’s side on their way to a 17-1 victory over Boroughmuir Jags at the Academy.

With fellow pacesetters Hutchie Vale Reserves losing at home to Livingston, the win sees Spartans move back up the table in the early rounds of the league campaign.

Spartans had the perfect opportunity to start the scoring in the 11th minute.  Laura McRitchie’s shot hit the post however the Referee pointed to the spot for an earlier transgression.  Heather Laing’s penalty was well saved by Hannah Michie.

Minutes later, Spartans finally breached the Boroughmuir backline.  Nichola Sturrock’s free-kick from the edge of the box was sent high over the wall and nestled in the top corner of the net.

Laura McRitchie doubled the lead in the 21st minute, slotting home a rebound after forcing a fine save from the young Boroughmuir keeper.

A three goal spell in as many minutes put the game to bed as a contest, with a Laing, Smart and McNaughton triple-whammy knocking the wind out of the Boroughmuir sails.

It was raining goals as McRitchie grabbed her hat-trick as the heavens opened above the Community Pitch, with the subs and coaching staff making good use of the dug out as a temporary shelter.

Kirsty Maden put Sturrock through to make it 7-0 before the scorer turned provider shortly afterwards, splitting the defence to allow McRitchie to run on to the ball before rounding the keeper to score.  The same player completed the 1st half score on the whistle.

McGill rung the changes at the interval however it was a familiar face who scored from the first attack after the restart to make it double figures.

Sturrock grabbed another before Thistle scored what was to be a consolation goal through Lily Braunholtz who let fly from the edge of the box and saw her shot squeeze past substitute keeper Ferguson.

Emma Curson combined with Sturrock in midfield with some fine one-touch football before seeing McRitchie deliver the finished article to patient build-up play.

Michie almost pulled off a fantastic save from Sturrock however the Captain’s shot was too hot to handle and the keeper could only slow down its progress as it went over the line to make it 13-1.

With 12 minutes to go, the visitors were, perhaps harshly, reduced to 10 players when the previously cautioned defender upended Sturrock on the edge of the penalty area.  The Referee deemed the foul worthy of a second yellow.  After the card was dished out, Sturrock crashed the set piece home.

McRitchie grabbed two further goals and Sturrock rounded off the rout on the final whistle against a Jags side who earned praise from McGill, “I must give a lot of credit for the game to the Boroughmuir players and coaches, who while having a very young squad on the pitch today continued to play football with moving the ball around to feet, and never giving up in making a game of it right up to the final whistle.”

Interim-Coach Walter McGill praised his side for producing a “good, clinical performance.”

McGill added, “The players continued to play football while spraying the ball around the pitch, and retaining possession, which had been worked on at training, along with executing our set piece situations.

“Everyone played their part in today’s win.  I must commend Nichola Sturrock and Laura McRitchie for their phenomenal goals tally today along with Emma Curson, who I personally believe had her best performance this season in a Spartans shirt.  Emma controlled the midfield area along with her endless running to win, retrieve and set up constant attacks on the Boroughmuir goal.”