Mike hopes to be mechanic of Durham’s downfall 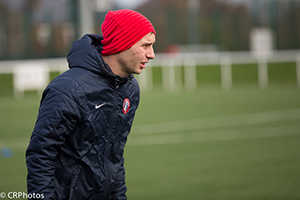 Spartans pre-season campaign continues this Sunday when they welcome WSL2 side Durham to the Capital for a cross-border challenge match.

The Ainslie Park side got off to a winning start last weekend with a 2-1 win over fellow SWPL outfit Queen’s Park and Head Coach Mike Ross says the victory has offered an early boost to the pre-season schedule.

“Training has been good this week – a win brings confidence and although we weren’t at our best last weekend we created several opportunities and should have scored more.”

With four new additions to the squad for the 2014 campaign, Ross was pleased that all 17 who featured in the game made it through without picking up any knocks.

He said, “We always want to keep our squad healthy and injury free. Sometimes when you haven’t played in a competitive game for a while it’s easy to pick up minor injuries.

“To compete at the top level you need all your players available and in peak shape to maintain that competitive element to the squad and training.”

This weekend’s attentions turn to an exciting clash against Durham Ladies.

The North East England club are preparing for life in the newly formed WSL 2 and will offer a strong challenge. How does the Head Coach think WSL2 compares to SWPL?

“I think it’s hard to compare them directly, but I do know that in both Scotland and England Women’s football continues to grow and I know Durham and Spartans are going in the right direction as they strive for success.

With continued investment in England’s women’s football, Durham are just one of several aspiring clubs in the WSL and WSL 2.

The sides met at the Academy this time last year where Spartans ran out 3-2 winners.

Ross added, “Like ourselves, Sunday’s opponents have strengthened their team since then, therefore we are expecting a tough game and that’s exactly what we want as we prepare for another exciting challenge in the top flight.”

On the playing front, Scotland International players Lana Clelland and Rachel Harrison are available for selection as Ross and Manager Debbi McCulloch continue to use the exercise of pre-season to work on new ideas in a less pressurised environment.

Ross concluded, “We know the importance of a good start in the league and are progressing well to be ready for that.”

The match kicks-off at 1pm on the stadium pitch.