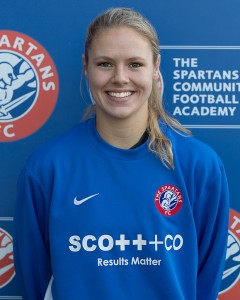 Spartans are delighted to announce the signing of American Morgan Mitchell who previously played for Armstrong State University in Savannah Georgia and for the Atlanta Silverbacks in the Women’s Pro-Am Soccer League.
Morgan began her Armstrong career as a midfielder but flourished as a forward, earning 2012 conference Player of the Year honors as a senior, she scored 47 goals in 90 matches for ASU. She was a four-time All-Conference and All-Region performer and earned All-American honours.

Morgan touched down in Scotland on Wednesday and immediately joined the squad for a training session at the Academy. After a conditioning session tonight (Thursday) and a further training session on Friday, Morgan will be included in the squad for Sunday’s Premier League match when Spartans visit Hutchison Vale in a 1:00 kick-off at Sauagton Park.