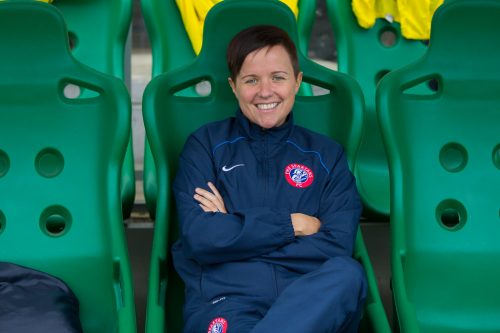 Spartans have unveiled their new look Coaching Management Team ahead of the restart of the Scottish Women’s Premier League.

Returning to the helm is Debbi McCulloch whilst outgoing Head Coach Paul Greig takes up a further internal coaching role within the Spartans Family, where he will assist the Men’s Under 20s team during their 2018/19 campaign.

Joining Debbi in the dug-out will be Assistant Head Coach Scott Noble and Coach Craig Booth.

McCulloch first joined the Women’s Premier League team in 2009 as Assistant Head Coach before progressing to become our Head Coach in April 2010 and from the end of 2012 1st Team Manager.

Throughout her career in charge of the team, Debbi led Spartans to four League Cup Finals, a Scottish Cup Final and also SWPL Runners Up in season 2011.

UEFA ‘A Licence’ Coach McCulloch and her new coaching team will take over the match day reigns for the first time as the SWPL 1 season returns after the break when the Ainslie Park side travel to Hamilton Academical WFC in a proverbial and much cliched ‘six pointer’ at New Douglas Park.

The match kicks-off at 2pm and your travelling support to get right behind the team is welcomed.  Admission £5 Adults with Concessions £3  Match Programme can be found online at the Hamilton website from 1pm, Sunday.