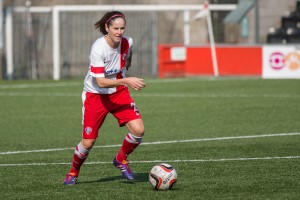 A fine wine, they say, matures with age. It’s not often the same is said about football players however in Suzy Shepherd, Spartans have a defender who’s no-nonsense approach is often intoxicating and can leave her opponents punch drunk after 90 minutes of combat on the field.

The Scottish Cup ‘veteran’ will be taking part in her 8th Final, her previous outings with Tynecastle, Celtic and Hibs Ladies, and Shepherd is keen to lift the trophy for a fifth time on Sunday when her side takes on Glasgow City at Broadwood Stadium.

Big games in the past against City have, says Shepherd, been favourable to her – a trait she is out to continue this Sunday. “I played part of City’s downfall the last time they lost in the Scottish Cup – a 2-1 midweek semi-final victory for Hibs at Toryglen in 2010.  Before that, in November 2008, I was in the Celtic side that inflicted their last domestic defeat before we won at the Excelsior Stadium back in September.”

Whilst familiar with the surroundings of the showcase event of the Scottish Women’s football calendar, Shepherd offered some advice for those within the Spartans flock who had yet to experience a Scottish Cup Final day.

“Simply go out and enjoy it. The whole day is a great occasion from start to finish.  It’s one you’ve got to make the most of and grab it with both hands as they don’t come around very often.

“It’s a one off game that requires you to be focussed and organised for the full 90 minutes. If you do that and give 100% on the day, there’s absolutely no reason why we can’t win.”

At 39, Shepherd is testament to age being no barrier to participation in sport. What’s her secret to keeping fit and in form at the top level?

“For me I feel that the older you get, the more you’ve got to train. I think it’s also down to working hard away from the Club too.  On training nights you focus on the technical side of the game, but outwith that I do a lot of strength and conditioning as part of my job as a Fitness Instructor and I’ll often find myself in the gym after a shift to keep me ticking over.”

Can Spartans make history this Sunday and secure Scottish Cup silverware at the first attempt?  There’s not even a hint of hesitation in Shepherd’s response.

“We’ve already beaten City this season so far, so we are more than capable of doing it again. We’ll go out with only one thing on our mind come 2pm on Sunday – to bring the cup back to Spartans where it belongs!”