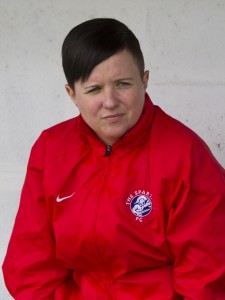 A 71st minute goal against the run of play by Abigail Harrison gave Celtic a 1-0 win at Lennoxtown in Sunday’s late SWPL kick-off.

Manager Debbi McCulloch shuffled her side after last weekend’s trip to Aberdeen, with Kirsty Hamilton & Ciara Barnes moving up off the bench and there was a start for teenager Ronaigh Douglas.

Spartans almost took the lead with the first move of the game.  An early run up the wing by McLaughlin allowed the midfielder to whip a low cross into the box however Celtic’s Fay done just about enough to smother the ball at Ewens’ feet.

It took a last gasp defensive intervention to thwart Ewens as she prepared to pull the trigger after Katie Reilly’s pass saw her nip in between the Celtic central defenders.

Celtic made a rare trip into the Spartans danger zone and it took a first class save from Rachel Harrison to prevent Sam McManus from breaking the deadlock.

The woodwork saved Celtic in the 26th minute when Ewens headed onto the bar after Trish McLaughlin’s pace forced a free-kick out on the touchline.

Spartans started the second half in a similar fashion to the opening forty five minutes – on the attack.  McLaughlin’s first touch just took the ball away from her as she broke into the Celtic box, Fay closing the space and smothering at the Spartans player’s feet.

Montgomery was next to have a go at the home goal.  Marshall’s free-kick saw the energetic striker lose her marker in the box however the header bulleted just over the bar.

The youthful exuberance of Douglas shined through as the pint sized player continued to snap at the heels of the older and more experienced opposition as Spartans looked to turn their possession into points.

Unfortunately, it was Celtic who took an unexpected lead.  Abigail Harrison got her toe to the ball ahead of her namesake in the Spartans goal to put her side 1-0 up.

Spartans looked to have earned a lifeline after Montgomery burst into the box only to have her heels clipped as she lined up a shot.  Despite the remonstrations by Spartans on and off the pitch, the Referee waved claims aside as play raged on.

There was one final opportunity for the visitors with the last play of the match.  A clumsy challenge on Montgomery this time warranted a shrill of the whistle however the resultant free kick evaded the plethora of bodies in the box and raced behind.

Speaking after the game, Manager Debbi McCulloch said, “I feel sorry for the girls today as I don’t think they deserved that.  You could see by the way the Celtic players reacted at the full time whistle, there wasn’t one of them celebrating the win.

“The first half we controlled however we dropped off a bit after the interval and with the number of chances we had, I was disappointed to go in level at half-time however the girls showed great spirit and determination.

“No-one should underestimate us just because of results.  We knew it was going to be a tough start to the season and Hibs are the only team in the Top 5 we haven’t faced yet.  Today was an important three points but we didn’t get them but I’m quite confident the next time we have to come here, things may well be different.

“I though the Ref had a great first half then in the second there were two absolute stonewall penalties for me but he didn’t want to take responsibility and award them. Unfortunately that’s football, some you get and some you don’t.

“All in all, there are lots of positives and we’ll carry them into next week’s home game against Forfar.”