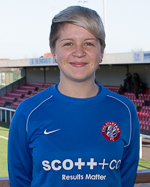 Spartans kicked off their competitive season with a 0-1 win away to fellow SWPL side Rangers in the opening round of the League Cup.

A 56th minute penalty by Lana Clelland gave Spartans the narrowest of winning margins at a cold and overcast Petershill.

A busy treatment table at the Academy saw Spartans Manager Debbi McCulloch shuffle her deck of cards, with a call up to the bench from the Youth Section for young striker Sophie Cunningham.

The opening exchanges were akin to a chess match as both sides engaged in a midfield war of attrition, sussing out areas of strength and weakness in order to make a telling move.

It was the tourists who almost broke the deadlock in the 20th minute when Johnstone in the Rangers goal pulled off a tremendous point blank save from Clelland inside the six yard box.

The energetic Kerry Montgomery was in fine form in the middle of the park as she continued to put pressure on the Rangers midfield, forcing some unwanted attention resulting in a trio of free-kicks in quick succession.

Clelland’s set-piece from 25 yards out came over the wall but failed to force a save out of Johnstone.

Rangers finished the stronger side with Reilly getting on the end of a Krnjiac corner however her attempt from the edge of the box sailed over the bar.

Neither side made any changes at the interval as the respective managers looked to their starting 11s to seek an early second half advantage.

That came in the 56th minute, virtue of a penalty for Spartans.

Reilly was unceremoniously clattered by a Rangers defender as the players went for an aerial challenge in the box.  The far-side lineswoman raised her flag and after a brief consultation with the Referee, the man in the middle pointed to the spot.

Clelland, who is set to travel with the Scotland squad later this week for the Cyprus Women’s Cup tournament, slotted the penalty hard and fast, leaving Johnstone no chance, despite the keeper diving the right way. 0-1

A challenge in midfield saw McLaughlin forced to withdraw with a leg knock, Donachie coming on as her replacement.

Kerry Montgomery had a fantastic chance to potentially bury the tie when she raced in on goal however her shot agonisingly shaved the outside of the post, much to the relief of the Rangers defence.

Sophie Cunningham came on for Captain Katie Reilly as the game entered its final stages with the home side desperate to grab an equaliser to take the tie into extra time.

The makeshift Spartans defence was resolute and held out for a win brought by sheer dogged determination against a Rangers side who will again play host, this time on league duty, in three weeks time.

Spartans Manager Debbi McCulloch was delighted to get the competitive season off to a winning start. “To come away with the win feels amazing, if I’m honest.  This week at training has been difficult with niggling injuries forcing us to rest a couple of key players for this game.

“Thankfully we managed to get through what promised to be a very tough fixture as we know Rangers are not only a physical side but can pass the ball well too.

“After our chat at half-time, the players responded well and were fantastic in the second half.  I felt that any breakthrough would come from a set-piece and when we were awarded what I thought was a clear penalty, Lana stepped up to the plate and provided a great finish to put us into the next round.”