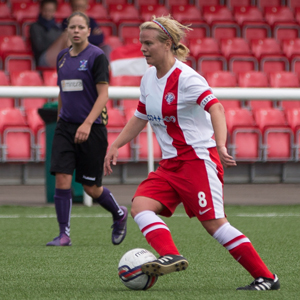 Spartans Manager Debbi McCulloch has paid tribute to former Club Captain Louise Paterson who has confirmed that she is set to become a mother.

Paterson, a Teacher in the Capital, will be swapping her footy boots for baby booties in the Autumn as she and husband Lewis await the arrival of their 1st child.

The 31 year old, a stalwart in the Spartans midfield since the Club’s inception in 2008, made the announcement earlier this week.

Paterson, who made 126 appearances and scored nine times during her 6 year spell, has finally hung up her boots as she gets set to make her debut for Team Motherhood.

“At the end of last season I had decided to retire, then I had a wee u-turn in the close season to squeeze in another year.  With the impending arrival of Baby Paterson, I don’t forsee me pulling the boots back on so they’re being hung up for good.”

Football has been a mainstay of Lou’s life since her childhood days, from being the only female in her Abbeyhill Primary School class to making her Senior debut for Preston Athletic when she turned 16.

The former Scotland U/18 age grade player spoke of her highs and lows of a football career spanning over two decades.

“My biggest highlight was being made Captain of the Club.  I had only been at the Club for a year and felt truly privileged to be given the honour to lead the team. 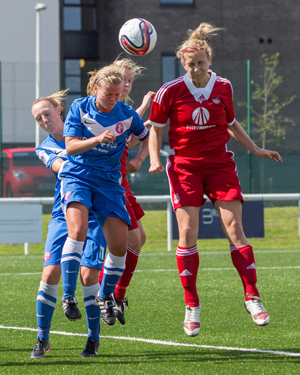 “If there were to be any regrets, its been the not being able to bring any silverware to the Club after being used to lifted trophies and playing in the Champions League with Hibs before I signed for Spartans.  I’ve got faith and belief though that the team are on course to get their hands on a trophy this season and the Bump and I will be cheering on from the sidelines when we can.”

A well respected player throughout the game and within the Academy set-up, Paterson “Playing on a Sunday has been my life for so long and it’s been fantastic to see the Club evolve over the years both on and off the pitch. I’d like to thank everyone behind the scenes for making it all happen.  Without the volunteers that have given up so much time over the years, the Club wouldn’t be where it is today.

“The women’s game itself has developed and grown significantly in recent times and it’s fantastic to see so many girls and ladies now playing football as their sport of choice.”

So, has Debbi managed to sneak in a joining form for Baby Paterson yet?  “Ha! Not yet, but give her time.  Spartans is a great club for any young person to join.  Irrespective of Paterson Junior’s gender, they’ll have Spartans blood and will be coming to Ainslie Park to play their football.”

Manager Debbi McCulloch paid tribute to her former Captain. “Lou has been part of the Spartans Family since I became involved with the Premier League team five years ago.  She has been a fantastic player to work with and in terms of our relationship with her being Captain of the team, she has been a fantastic support to all players along with myself.

“Her pregnancy announcement is fantastic news for Lou and her husband Lewis and even though we will miss her leadership in the dressing room, everyone is delighted for her and I would like to personally thank her for all her efforts over the years.  There have been several special moments that Lou can take away with her and she leaves with our best wishes.”

Chairman Walter McGill commented, “Lou has been a fantastic and loyal player to Spartans since 2008.  A great example to all within the Club of what it means to be prepared and ready for every occasion. I am lucky to have had Lou as a member of the team and someone I count on to have as a friend.”