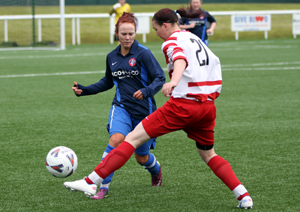 Spartans take on Hamilton Accies at Ainslie Park on Sunday in a dress-rehearsal of the opening game of the 2014 SWPL season.

Having played SWPL newcomers Queen’s Park Spartans Manager Debbi McCulloch is looking forward to another pre-season challenge against top flight opposition, “We’ve got a good relationship with Hamilton and have played them in pre-season friendlies over the last couple of seasons.”

In last year’s SWPL, the sides met in a midweek fixture at Glasgow Green, Spartans coming away with the three points in a 0-3 win however McCulloch isn’t reading anything into last May’s result.

“It’ll be yet another strong test for us and they will have strengthened their squad, as we have ourselves, since we last met and it’s a good opportunity to give players game time as we try to look at what our best blend of talent will be for us starting the new campaign, which of course, is against Sunday’s opponents.”

“Accies are a talented side with a mix of youth and experience, with their physicality a key feature of their game so we are expecting a good contest.”

The physical element of pre-season has already taken its toll and McCulloch is without the services of Alana Marshall for Sunday’s friendly who picked up a knee strain in last week’s 4-3 win against WSL2 side Durham whilst Natasha McMahon has a quad strain.

Bobby Beveridge is recovering from a dead leg and is rated 50/50 whilst Lana Clelland is responding well to treatment for an ankle knock.

Whilst the treatment table sees some of the 1st XI miss out, two of the rising stars of the Youth set-up, Ronaigh Douglas and Gemma Cunningham, earn call-ups to the Senior squad.

The fixture at the Academy kicks off at 1pm. Admission is FREE.