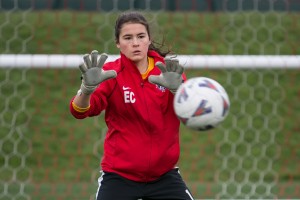 It’s Derby Day at Ainslie Park as Spartans welcome Hibernian in Round 16 of the SWPL 2015 season.

Debbi McCulloch will be looking for a change of fortune for her side who go into the game on the back of a trio of narrow and frustrating defeats and victory in the Edinburgh Derby could see Rangers leapfrogged in the Top 6 ladder.

Kid keeper Eartha Cumings continues between the sticks in what will be a busy week for the teenager as she returns to her home ground on International Duty as part of the Scotland U/17s squad who face Ireland on Wednesday 2nd September (7pm KO) in the Vauxhall International Challenge Match and also a closed doors friendly against the same opposition on Friday lunchtime.

Chris Roberts’ side remain neck and neck at the top of the table with Glasgow City. The west coasters are in derby action of their own against Rangers in City’s neutral home at Airdrie’s Excelsior Stadium.

The match at the Academy kicks off at 1pm. Admission £5 adults, £3 concessions and Under 16s go free!

Meanwhile, Lynsey Cowan’s Reserves head to Ravenscraig Sports Centre for a 4pm start against Motherwell in the 2nd Division South / East match of the day. The top two have set the early running and it promises to be an enthralling encounter where the winner will take pole position in the race for the title.