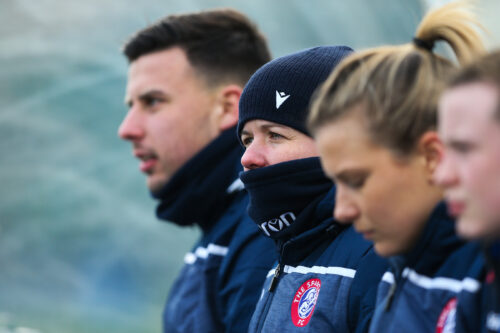 Ahead of the 2020 season, Scottish Building Society SWPL, caught up with Spartans Head Coach Debbi McCulloch last week.  The full interview can be found below.

How are excited are you for the 2020 season? We are all very excited for the season ahead. Several changes to league structures and clubs, including ourselves, investing more than ever means that we face new challenges but everyone is highly motivated and ready to kick the season off.

What do you make of the changes for the new season? I feel the changes will have a positive impact on the game with clubs, players, and coaches having to take steps to increase the professionalism of everything they do. The play-off’s will provide and exciting end to the season for the teams involved and will hopefully increase the exposure of SWPL 1 and SWPL 2.

What are your aims and ambitions for the new season? We want to compete and have a positive impact on the SWPL 1. We have specific targets as a team and with us securing the majority of the squad from season 2019 and the addition of some new faces, I believe we can achieve our goals. As I’ve said before, Spartans are in the SWPL 1 based on merit and the hard work of all the players who have played for the club over the past ten years so we aren’t here to make up the numbers and teams certainly shouldn’t underestimate us.

Based on the other teams in the league, do you think this will be the most competitive season ever? I believe SWPL 1 has been competitive for the past few years now but you have to raise your game every season to ensure you stay in touch and improve to continue to be able to compete with teams like Glasgow City. I think there will be a different dynamic associated with the league this season as the pressures some clubs face is going to be very different to previous seasons. Looking at the teams, in SWPL 1 this season, anyone is capable of beating anyone.

With the new season around a month away, how have preparations been so far? Pre-season is going well for us. The players rested well over the festive period and have hit the ground running since returning early January. Pre-season is a vital stage of any players season and we made it clear to all our players what the expectations were from day one. There is a greater sense of competition within the squad, compared to last season, so the players are not only being pushed by the coaching staff, they are pushing each other.

Do you have plans to/have you had much change to the squad? We have brought in four new players and welcomed back Alana Marshall, following the birth of her first child, along with Simone McMahon returning from injury. The new players have settled in well and will strengthen the core of our team by providing further competition in key areas for us. Alana and Simone returning has given the squad a huge boost as both are experienced, versatile and talented players.

For perhaps new fans of the women’s game, who are some players in your squad they should look out for? For me, I believe Michaela McAlonie has a big part to play in our squad this season as she proved her importance to our team last season via a string of strong performances. I would also keep an eye out for Robyn McCafferty and Sarah Clelland who was voted our Players Player of the Year last season.

As well, are there any new/younger players we may see more of in 2020? Caley Gibb, Alicia Yates and Holly Aitchison are three of our youngest players in the squad and all three have the ability, and desire, to make an impact in the SWPL 1 this season. Giving young players an opportunity to play at the highest level should never be feared in my opinion as last season the younger players embraced the opportunities given to them and flourished.

You start the new season away to Hibernian. What do you make of that fixture? Same opening fixture as last year where we drew 0-0 against Hibernian Ladies and probably delivered one of our best performances. Player departures at Hibs Ladies have been well documented but we will be under no illusions as the core of their team will still be one of the strongest in SWPL 1. We will go into the game fully prepared and focused on what we need to do to and if the players perform to the levels, we know they are capable of, I have no doubt we can produce a positive result.

How important do you think it will be to get off to a good start? Start, middle, end of the season… every week is going to be important for us. We are going to live and breathe every training session, league match, cup match because we want to push on from last season and give the players the opportunity to be the best they can be so the club can achieve what it is capable of.

Finally, what would you say to encourage people to come and support your team this season? It’s going to be a cracking season, with plenty of drama, so please come down to Ainslie Park this season and get behind Spartans. Your support will be greatly appreciated