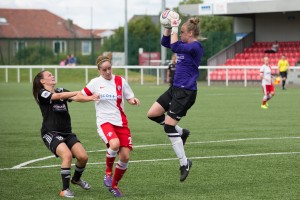 Spartans No.1 Rachel Harrison has been called up to Anna Signeul’s 20 player squad for the forthcoming crucial FIFA Women’s World Cup Play-Off double header against Netherlands.

Harrison, who has made 105 appearances for Spartans since she joined in 2010, is one of three goalkeepers called into the side who play the first of two legs against the Dutch at Tynecastle Stadium on Saturday 25th October (5.30pm KO).

The 25 year old shot-stopper, who has produced nine clean sheets this season for her Club spoke of her delight in being recalled into the squad.

“To have been considered for the squad in what will be two absolutely crucial games for the National Team is a great honour.  Having been involved in training camps and squad sessions already this season, it’s a privilege to be called up as one of just two uncapped players.”

Scotland will be looking for the home support to get behind them in order to take a lead to Rotterdam five days later for the return leg.  The winners will take on either Ukraine or Italy in the play-off final in November.

Before meeting up with her colleagues at the National Team base, Harrison has Scottish Cup success in her sights as she prepares for the Semi-Final v Aberdeen this Sunday at under the roof at Ravenscraig.

“Sunday is yet another big game for both myself and my Spartans team mates as we look to make it to the Scottish Cup Final for the first time.  Aberdeen will be tough opponents, that much we know from having already played them four times this season, however we take momentum with us into the ‘dome’ and I know if we play to the best of our capabilities, we’ll be making the trip to Broadwood, just 90 minutes away from potential silverware next month.”