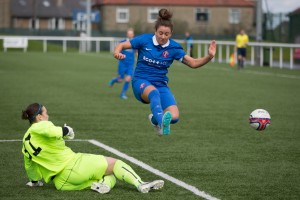 Its honours even in the East v West tests between Spartans and Rangers so far this season as the Glasgow outfit gained revenge for their earlier Cup KO with a 0-4 win at Ainslie Park.

Spartans Manager Debbi McCulloch offered places on the bench to youngsters Cara Targett-Ness and Chloe Gilhooley, two teenagers who have been performing well at age grade and Reserve football this season so far.

With no fixtures for a full four weeks, both sides set out their stalls at a frantic pace determined to extend their respective unbeaten runs.

The visitors were to draw first blood when a stray pass inside the home half was seized upon and Natalie Ross was to be the benefactor, putting Rangers a goal up after just 8 minutes.

That lead was to be extended a quarter of an hour into the game when Hayley Cunningham collected the ball from 25 yards and her powerful strike flew past the outstretched arm of Rachel Harrison into the net.

Sarah Ewens was desperately unlucky just before the interval when she weaved in and out of the Rangers defence inside the opposition 18 yard box but her final effort agonisingly hit the wrong side of the net.

Just five minutes after the break had gone before Ewens looked like she’d managed to get her side back into the game however she could only look on as Amy Lindsay flung herself at the ball to clear it off the goal line and over the bar to safety.

Rachel Harrison pulled off a great point-blank-range save to deny Natalie Ross as the Rangers Captain looked to close the game.  From the resultant corner, the same player narrowly directed her header over the bar.

Rangers grabbed their third of the afternoon when Lisa Swanson was first to react following a lofted ball into the home box and slotted home to make it 0-3.

With eight minutes left on the clock, Spartans were forced into making a second substitution of the after when Ronaigh Douglas was forced to retire hurt after being injured in a robust challenge under the nose of the far-side linesman that went unpunished by the match officials.  The restart of an uncontested drop ball saw a Rangers player direct the ball into the unguarded home net, with Referee Vikki Allen rightly awarding a goal kick as a result.

A disappointed day at the office was compelled deep into injury time when Swanson was on hand at the back post to nudge the ball home after a weak shot trundled its way across the box for the striker to grab her second of the afternoon.