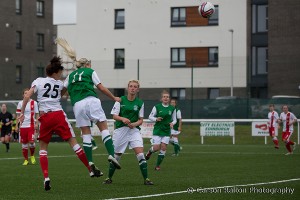 There’s nothing better in sport than looking forward to a game against your local rivals.

On Sunday at Ainslie Park, it’ll be no different for Debbi McCulloch and her Spartans side in Round 8 of the SWPL championship.

Spartans take on Hibernian Ladies in Sunday’s lunchtime Edinburgh derby as both sides look to continue their impressive form of late as the race for a post-split Top 6 place enters its business end.

The Edinburgh duo met each other four times last season with both teams coming away with two wins.  Sunday’s SWPL fixture is set to be another closely contested encounter between two teams who can hardly be accused of being shot-shy so far this campaign.

Ahead of the Capital clash, Spartans Manager Debbi McCulloch said, “The team is looking good and sharp.  We have trained well and have worked hard in our preparations for this Sunday, so we are all good to go and feeling confident.

“The players are really looking forward to Sunday and for them, the game can’t come quick enough.”

This week has seen some breathing space created in the treatment room as Ashley Nicolson, Kirsty Hamilton and Bobby Beveridge returned to training, offering further options for McCulloch and Coach Mike Ross.

Continuing her road to recovery is Clare Crosbie who participated in Monday night’s session, something that delights her Manager, “I know how tough this process has been for Bing but I also know she is returning as a stronger person and player which is great news for Spartans.”

The match kicks off at 1pm on the Stadium Pitch.