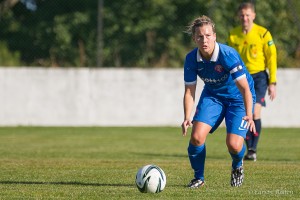 Its East v West in the penultimate game of SWPL 2015 as Spartans take on Celtic at Ainslie Park with Captain Katie Reilly looking for her team to end their home campaign on a high.

The skipper, in her second year wearing the coveted armband, leads Spartans into another tough encounter that also sees both sides backing the Show Racism the Red Card campaign.

“I think we are all aware of how important the match is for ourselves and winning in front of our fans in the last home game of the season would be just reward for the workmanlike preparation the girls have put in, especially over the last few weeks.

“The absence of a game last week was frustrating as we’ve had some good performances and results recently however the tempo at training has been fantastic and I know the girls will be looking to keep that fine vein of form going into the last couple of fixtures.”

Last time out Reilly captained her side to a 0-4 win on the road at Aberdeen in what was a clinical performance against the team in third spot. A result that the midfielder feels reflects her team’s overall form across the campaign.

“I think we have been unlucky this year and our place in the table doesn’t reflect the strength of character and quality in the team. In a handful of the games Lady Luck hasn’t been our friend and yeah, we’ve perhaps been guilty of not taking all of our chances. However over the last few games, we’ve come out to show how good a team we are – we perhaps just need to improve on that consistency.”

It’s the second visit to the Spartans Academy in seven days for Celtic after their Scottish Cup semi-final defeat against Hibs and Reilly is wary of a potential backlash.

“As far as clichés go, it’s true to say that there’s no easy games in the Top 6 and I’m sure Celtic will head back here to prove a point after their cup defeat and will maybe look to take their frustrations out on us, so we will need to bring our ‘A’ game with us on Sunday.”

Leading the home side out on to the park will be players from the Spartans Girls Under 9s.