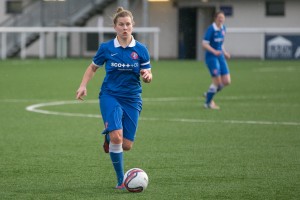 Spartans Captain Katie Reilly is keen to get the competitive season underway this weekend when she leads her team on to the field against Rangers in the opening round of the League Cup.

Reilly, in her third year wearing the coveted armband, is looking to build on last weekend’s 6-0 pre-season victory over fellow SWPL side Inverness in a competition where Spartans have a proud record over the years.

“The win last week was a welcoming boost ahead of Sunday.  Not only was it important for everyone to get game time but also for the team to score goals and build up confidence too.  I think where we have been working on different patterns of play it’s really coming together.”

Reilly, who made her debut for the Club in August 2012, saw the League Cup as an excellent opportunity to pick up silverware, “I think we are quite similar teams.  It’s always a tight affair when we play against Rangers and Sunday will be another close game.

“After reaching the Final of this tournament perennially then last year coming up short in the Quarter Finals, we’ll be looking to redress this and get a good run in the competition.  We are a team who should be winning trophies and there is no reason why we can’t win it this year.”

The 28 year old skipper has the honour of once again leading her team into battle for another campaign and was enthused by the way pre-season had shaped her side for the months ahead.

“There are a few new fresh faces in the squad this season which definitely motivates the girls to focus on maintaining their place in the team.  It’s also adds a different dynamic to the team this year and there’s a buzz on and off the park – we can’t wait to kick off on Sunday.”

Sunday’s League Cup tie, which is played to a finish on the day, takes place at Garscube Football Centre, West of Scotland Science Park, Maryhill Road, Glasgow, G20 0SP with a Noon kick-off.

Following the clash, Spartans Reserves and Rangers A will play out their Division 2 League cup tie at the same venue.