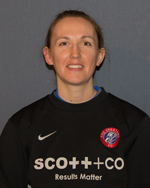 With caretaker-coach Walter McGill presiding over proceedings in the interim period, the team knocked up an emphatic 5-0 win at home against Edinburgh South last weekend, including a hat-trick for Nichola Sturrock and a double from Helen Lyon.

The hosts will be looking to get their first win of the league campaign after a disappointing 0-7 loss to Hearts Development on the opening day and a 0-0 draw against Seton Ladies last time out.

It’s been a mixed bag for the Reserves so far this season however, Defender Emma McNaughton is confident the team are back on track to chase for promotion.

“There’s a good feeling around the squad right now, Walter has come in and changed things around for us and there’s a lot more focus and drive to us now.

“Last week we rediscovered some of the good football we played last season and whilst there’s a lot for us to build on, things are heading in the right direction.”

Spartans ran out 0-11 winners in the corresponding fixture last season however McNaughton knows things will be tougher this time out.

“Having played Leith last season, they are a physical side who are keen to make life difficult and close you down and we will rightly be expecting a tough game on their home turf.  As long as we focus from the first whistle and win every individual battle on the pitch, we’ll hopefully come back with the 3 points.”

The Reserves have been boosted this season by a number of new faces around the Academy, a fact that enthuses McNaughton. “There are a lot more options from the team now including a strong bench to choose from.  The increase in playing personnel has resulted in a spike in attendance at training with players now in the mind-set that their position on a Sunday is under threat.

“We got a lot of younger players from Edinburgh Uni who have come in and are offering a lot of enthusiasm, pushing us older players on as well which is good for us.  The blend of experience and youth in the team is fantastic, particularly when we have some of our youngsters coming through from the Youth set-up and can look upon the older heads for support and guidance at training and throughout game time.”

The match is being played at Leith Links, with a 2pm kick-off.