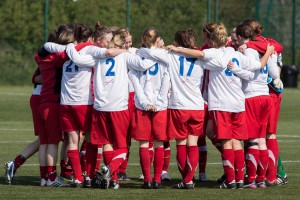 Spartans Reserves notched up their 50th goal of their SWFL 2nd Division campaign as they came back from behind twice to secure a 2-3 victory against Edinburgh Caledonia at Heriot Watt University.

Interim-Coach Walter McGill’s patchwork side, which included four U/17s in the squad, had to deal with playing catch-up football after going behind in the 20th minute however the side, hampered by injuries and unavailability rallied & within moments of the restart, drew level through Anne Smollet.

A drive up the wing by Laura McRitchie saw her slip the Caley defender before crossing for Smollet who hammered the ball home.

The joy was short-lived however and in the 40th minute, an up and under from midfield saw the Spartans offside trap breached and despite the valiant efforts of keeper Steph Ireland who raced off her line, the ball was lobbed over her head and into the empty net.

On the stroke of half time however, Spartans equalised for the second time of the afternoon.  Playmaker Lucy Brown’s inch perfect delivery cut through the heart of the Caley defence for Smollet who still had some work to do before slipping the ball under the host side’s keeper.

The strike was the side’s 50th in the league so far this season and one that sent the sides into the break with nothing to separate them.

A first half goal fest couldn’t be emulated in the second however there were chances at both ends as Ireland had to look sharp to clear her lines whilst Sophie Cunningham’s 20 yard effort looked net bound before the Caley keeper pulled off a fantastic save.

With 20 minutes left on the clock, Spartans grabbed what proved to be the winning goal.

A free-kick into the box was headed goal-bound over the outstretched arm of the keeper by Kirsty Maden with Laura McRitchie on hand to ensure the ball made it over the line, if it hadn’t already done so, (dubious goal panel still to sit on this one!) with an emphatic thump to record another three points for McGill’s side.

The results sees Spartans secure third spot ahead of the summer break.  McGill said, “”I am incredibly proud in the performance of the team today who came back from behind twice to secure victory.

“I was particularly enthused the attitude and response from the quartet called up from the u/17s, Cara Targett-Ness, Brogan Douglas, Sophie Cunningham and Chloe Gilhooley. All four were involved in today’s victory and not one of them looked out of place.

“I would like to pay special mention to Cara Targett-Ness from our u17s who fitted into the centre mid position as if she was a seasoned campaigner and never put a foot wrong,

“The players were both a credit to the reserve team but to the u17s, and a great representation of the talent being cultivated by the work undertaken by their coaching staff of John Douglas, Nichola Sturrock and Louis Douglas.

“I also thought Laura McRitchie and Emma McNaughton stood out today too.  Laura’s endless runs up and down left midfield to deliver into the box or the lung-bursting recovery runs back into defence, was inspiring to watch.

“Emma proved her versatility once again by starting at centre back yet ended up in the left back spot allowing her to command a controlling role in the defence.

“We now enter the mid-season break and the players have given two weeks off, but they have been given a fitness programme to maintain a reasonable level of fitness.”