Reserves look to be a thorn in Thistle’s side 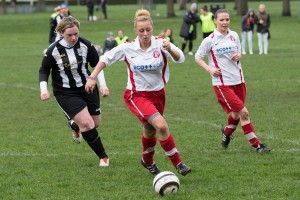 It’s second against third on Sunday as the Reserves make the short journey across town to take on Boroughmuir Thistle in the SWFL Division 2 South East match of the day at Meggetland.

The side head to Meggetland undefeated in the league since their opening day loss to Hutchison Vale Reserves and for Central Midfielder Emma Curson, a renewed enthusiasm around the changing room has been the catalyst to a recent run of a hat-trick of league wins.

The 21 year old sports coaching student is back in her first full season after coming back from injury and is enjoying her football at the Club.  “There’s been a tremendous change of attitude since the start of the season with a sense of professionalism and higher standards within the team.  There’s just a lot more oomph about the place to be honest.

“If we take last week’s game as an example, we came back from 2 goals down to win 3-2 against a decent Livingston side and perhaps the belief in ourselves to achieve this wouldn’t have been there.”

The Reserves rich vein of form has had an impact on and off the pitch too with each training session being a hub of activity.  So, what has been the catalyst behind the change in fortune for the side?  Curson notes, “The levels of team work and togetherness have improved since Walter has come in, he’s brought in a self of belief into the team and we are beginning the believe in each other.

“This is paying off in terms of numbers at training.  At the start of the season we struggled to get double figures, now we’ve got players making changes to their routines to ensure they get along on a Monday and Wednesday so they can be considered for the squad on a Sunday.”

Interim Coach Walter McGill is enthused by the progress the side have made since under his watch.

“I am looking forward to the challenge ahead of us in our game away to Boroughmuir on Sunday.

“The squad have been working incredibly hard at training this week in preparation for this weekend’s game.  I personally feel that the steady progress the team have been attaining since I took over the helm has been fantastic, and is completely attributed to all the players within the squad for the current run of form we are achieving.

“The players, since I have started working with them, have bought into the Spartan’s vision, direction, philosophy, standards, and the whole Spartan family togetherness that will stand them in great readiness for any and all future matches over the course of the season, starting again against Boroughmuir on Sunday.

“I am relishing in the prospect of seeing how we perform against a team, who like ourselves, have lost only one game this season in the league, and I think it will be a stunning game for the spectators to come and watch.”

The match takes place on Meggetland’s 3g surface and kicks off at 1pm.