Reserves secure Promotion – without having to kick a ball 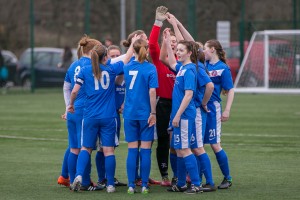 Spartans Reserves are celebrating success after securing promotion from SWF Division 2 SE / West on Sunday – without having to kick a ball.

Cowan, in her first season at the helm, said, “I’m incredibly proud of the team and my back room support.  It was our aim for the season and I’m delighted for each and every one of the players who have contributed throughout the campaign, both in training and on the pitch, in order to achieve our goal. The promotion has been well deserved.

“We have shown teams in the league what we are capable of, including scoring 100 goals so far and playing some attractive football along the way.”

The Reserves still have two games left, with Blackburn Utd visiting the Academy on 18th October whilst the season comes to an end away to Hutchison Vale Development on 1st November.

Even with promotion already in the bag, an ebullient Cowan is determined to finish the season on a high.  “We will be back on the training pitch working on our game plan to polish off a great season with two more wins and hopefully add to our goal tally whilst keeping a couple of clean sheets at the other end.”