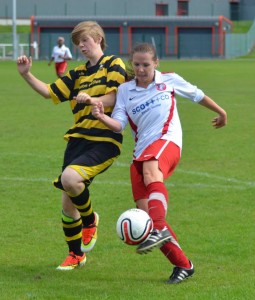 It’s back to League action for Walter McGill’s Reserves when East Lothian outfit Seton Ladies head to the Capital for Round 8 of the 2nd Division South East campaign.

Spartans will be looking to keep their unbeaten home record intact having only conceded three goals whilst playing on the Community Pitch since the season kicked off in March.

After a rest week due to the second of three divisional League Cup Finals being played at the Academy, McGill is eager for his team to get back onto the pitch to play a competitive match.

The Coach said, “The visitors will be looking to kick-start their campaign and I expect it will be a tough encounter between two competitive teams.

“We have been working hard over the last two weeks on our formation and tactics for the game and I am looking forward to seeing this come to fruition come midday on Sunday.”

Captain Nichola Sturrock echoed her Coach’s comments adding, “We haven’t played Seton so far and like many teams in our league, they will have added to their squad over the close season and will offer us a very strong challenge.

“League positions can often offer a false sense of hope and we certainly won’t be taking anything for granted and the team will be approaching the game like any other.”

The match kicks off at Midday on the Community Pitch.