Ritchie’s off to the Lichties 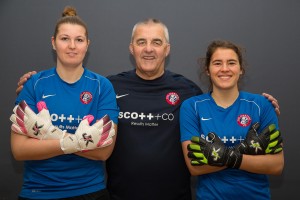 It’s with tremendously mixed emotions that we announce the news that legendary Goalkeeping Coach John Ritchie is on the move from Ainslie Park to take up his new role as Goalkeeper Coach at SPFL 2 side Arbroath FC.

‘JR’ has become an institution within his three and a half years at the Club, putting a series of goalkeepers through their paces and offering direction throughout each ninety minutes and beyond.

JR’s professional career between the sticks stretched some 17 years in which he played 450 games for Cowdenbeath, Bradford City, Dundee United and Brechin City (twice) – a club he later went on to manage and take to the Division 2 title in 1989-90.

The effervescent 69 year old Ritchie said, “I’d like to say a big thank you to everyone at Spartans for three and a half wonderful years.  Little did I know when I agreed to come that I was joining such an amazing organisation that uses the power of football for the very best reasons.

“So many people committed to doing so much for no reward other than knowing they are doing something good.   I’d also like to offer a massive thanks to all the girls for the respect they showed me, their commitment, their affection and trust – I will miss them dearly and love them all to bits.

“I will not be a stranger however and I will try and get to games when I can and pay my money to shout at them from the stand instead of the dug out!”

Manager Suzy Shepherd said of the announcement, “Naturally I am gutted to lose not only a fantastic coach but also a man who is one of the most respected in the game.  However, this is a brilliant opportunity and one that I wish JR all the best in.  I’ll definitely be keeping an eye out on the Arbroath results this season!”

JR will meet up with two former Spartans Men’s players in the shape of Omar Kader and Lichties Captain Mark Whatley.