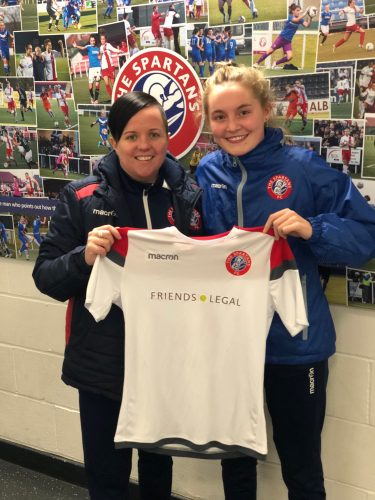 Spartans have made their first signing ahead of the new Scottish Women’s Premier League season getting underway by securing the signature of Robyn McCafferty.

The 15-year-old defender put pen to paper on a deal which sees her join the club from Hibernian U19’s Performance team.  The young centre back also represents and captains Scotland Women’s Under 17’s.

Talking about her move to Spartans Robyn said “I’m so excited to be joining such an ambitious club like Spartans.  I’ve been training with the team for the past couple of weeks and have been impressed by the facilities and level of intensity at training”.

Head Coach Debbi McCulloch spoke of her delight at securing the capture of the talented youngster.  She said “Robyn is a player I have admired for some time now so I was keen to secure her services for the forthcoming season.  At the age of 15 some people may think Robyn is too young for SWPL 1 level but they couldn’t be more wrong. Yes, Robyn still has plenty to learn but I’ve been hugely impressed by her maturity and level of ability since joining us. She has a very bright future ahead of her and I look forward to working with Robyn for many season to come”