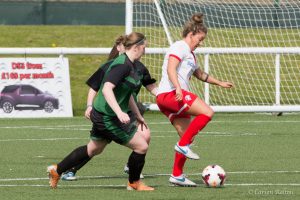 A penalty from Alana Marshall & a brace from Michelle Russell saw Spartans make it an early season double over Stirling University in a frantic encounter at Ainslie Park.

With three games in seven days, Manager Suzy Shepherd reshuffled her pack with returns to the starting line-up for Louise Mason & Danni Pagliarulo as Spartans looked to bounceback from recent defeats to Rangers and City.

The Students were keen to avenge their earlier Cup defeat at the same venue however it was Spartans took the lead in the 25th minute. Louise Mason’s dancing feet were clipped by Uni defender Robertson inside the box, leaving Referee Vikki Allan with her easiest decision of the afternoon.  Alana Marshall stepped up and guided the ball into the corner of the net to break the deadlock.

Mason continued to cause the Stirling side difficulty as she tormented the defence with her penetrating runs.  Her 37th minute cross was met by Michelle Russell who tapped in her first of the game and Spartans second.

The visitors reduced the deficit 10 minutes after the interval when Lisa Sutherland picked up a loose ball 30 yards from goal and unleashed an unstoppable effort that sailed over Cumings, despite the keeper’s despairing dive.

Nicola Pullar almost pulled things back to level terms however it was Cumings to the rescue from close range.

The match took a twist in the 62nd minute when Stirling player Rebecca Galbraith was offered an early shower by the Ref.  Danni Pagliarulo was upended in the middle of the park however it was the reaction of Galbraith that saw her see a red card – and the Spartans player a red hand mark across her buttocks!  Undoubtedly the most bizarre of injuries experienced in the player’s career.

The numerical advantage saw Spartans place a stranglehold on the game, and it was unsurprising to see Mason turn provider once again to seal the win.  Fine footwork brought the playmaker infield to set up a shot which was saved by the keeper however Russell was on hand to nudge home the rebound to secure a three valuable points.

You can also read the Stirling version of events here: http://www.scottishfa.co.uk/swf/scottish_fa_news.cfm?page=1517&newsCategoryID=26&newsID=16259