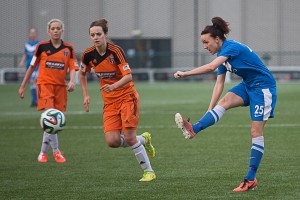 Spartans attempts to secure Scottish Cup silverware for the first time in their six year history fell at the final hurdle against Glasgow City at Broadwood Stadium.

Many red & white clad supporters had made the journey from the Capital – and further afield – making up a sizeable chunk of the  525 who attended Scottish Women’s Football’s showcase event of the season.

City kicked-off as temperatures plummeted around the concrete arena with the fans giving the food van at the bottom of the stand a roaring trade in hot beverage sales!

Lana Clelland and Kerry Montgomery linked up well in midfield early in the game forcing City onto the back foot and the opening corner of the afternoon.  Alana Marshall’s cross into the box unable to connect with a Spartans head within a plethora of players in the City danger zone.

Clelland continued to pose a problem for the Glasgow outfit, with Denise O’Sullivan counting herself lucky only to escape with only a talking to from Referee Vikki Robertson after clattering the Spartans player in the middle of the park.

Fiona Brown broke the deadlock in the 26th minute with a fine finish after working her way to the corner of the box before sending her shot over the outstretched arm of Harrison into the net.

Montgomery found space in the middle of the park after being released by Clelland’s inside pass however the long range effort failed to trouble Deiter in the City goal.

Spartans were dealt a blow shortly before the interval as Sarah Ewens went down under an innocuous challenge on the half way line.  The striker was forced to retire however it took a full 3 minutes for the ball to go out of play before Louise Mason could take her place from the bench.

Further insult to injury deep into injury time for Spartans came in the shape of a second for City.  O’Sullivan’s strike from the edge of the box finding its way home.

An early opportunity for Spartans to get back into the game came just after the break as Katie Reilly’s cross just evaded the unfortunate Kirsty McLaughlin inside the City box.

City had one hand on the trophy in the 67th minute after Fiona Brown grabbed her second of the afternoon and the game was put to bed with 12 minutes left on the clock when Jo Love added a fourth. The McLaughlin’s traded places before the game could resume, Trisha replacing Kirsty.

With five minutes left on the clock, the goal scoring was completed as Love lobbed Harrison make it 5-0.

Harrison was then called upon to make her best save of the afternoon, saving a Susan Fairlie strike from close range, drawing warm applause from the by now frozen followers in the stand.

Spartans Manager Debbi McCulloch said after the game, “Even though the result wasn’t what we wanted, we played with great desire and determination today.  We gave it everything.  I’d also like to thank all the fans who travelled to the game today, your support has been tremendous and the players and staff truly appreciate it.”