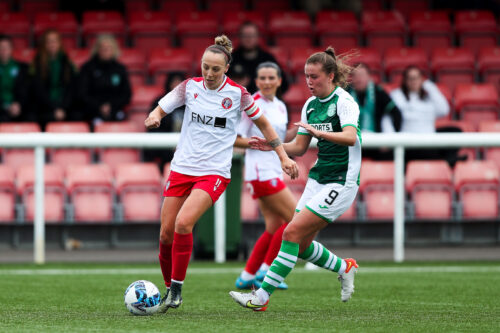 This Sunday sees Spartans travel to Meadowbank as they begin their 2023 Scottish Cup campaign with a fourth round draw away to Hibernian.

It’ll be a first trip to Meadowbank this season for Debbi McCulloch’s side as the two teams earlier meeting took place at Ainslie Park. That game finished honours even in a two all draw at the Spartans home ground. Becky Galbraith opened the scoring, heading home from a perfectly executed corner routine, Hibs equalised soon after then went onto take the lead through Hinds. Spartans would again find the net from a set piece as Alana Marshall struck a long range free kick to level the game.

Dean Gibson’s side will come into the game on the back of a 4-1 win over Dundee United. Whereas Spartans will be hoping to continue the good run they created in the Sky Sports Cup, knocking out both Hearts and defending champions Celtic on penalties. Hibernian no strangers to penalty shootouts themselves, having won the inaugural capital cup earlier this season from the spot.

The Scottish Cup tie kicks off at 12pm at Meadowbank Stadium, with tickets purchased at £8 for adults and £4 for concessions. Tickets are available through Fanbase here.