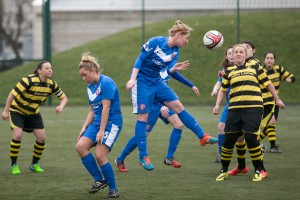 The Reserves kicked off their SWFL 2nd Division South East / West campaign at Ainslie Park in style with a 12-0 victory against Seton Ladies, writes Kayleigh McNeill.

Armed with a blend of youth and experience, Lynsey Cowan fielded a strong starting XI against the ladies from East Lothian in a bitterly cold afternoon in North Edinburgh.

The girls went out with an air of confidence from the first whistle with Captain Nichola Sturrock opening the scoring, with what would be the first of many, from a free kick after only 4 minutes.

From then on, great link up play from the central midfield saw the girls come close on several occasions before the ball dropped to Chelsea Neil with her first goal for the club and first of the season.

Within seven minutes Neil notched up a super fast hat-trick followed by Sturrock’s second of the afternoon taking it to 5-0 at the end of the first half.

The second half kicked off much as the first, with Sturrock completing her hat-trick in the 53rd minute.

Sturrock increased her personal tally to four, sandwiched in between a Sofie Cunningham double strike bringing the score to 9-0 just after the hour mark.

When not firing in the goals, Spartans held possession whilst working the ball around the park whilst the defence stayed strong cutting out any Seton advances before they could amount to anything.

Substitute Helen Lyon built on the link up play between the attacking players and made it 10, quickly followed by a fifth for Sturrock and a last minute goal for left back Emma McNaughton who finished the scoring to give Head Coach Lynsey Cowan the ideal start to her inaugural campaign at the helm.