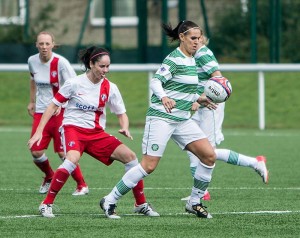 Spartans head North on Sunday to take on Aberdeen Ladies in the Quarter Finals of the SWPL League Cup, a tournament that Debbi McCulloch’s side have a proud record in, having reached every Final of the Tournament played since 2008.

After a rest week to accommodate the Women’s National Team’s World Cup qualification hopes, the return to action is a doubly welcome one for Suzy Shepherd.

After an enforced extended break following a collision in the recent SWPL outing at Rangers, the defender is desperate to get back in the mix.

“I took quite a dull head knock during the game at Petershill and as a precaution, I had to take some time out but I’m glad to back in contention for a place in the squad for the trip to Aberdeen.”

The mood within the camp ahead of Sunday’s game is one that enthuses the former Scotland A squad member.  “There’s a great buzz around the camp at the moment.   We’re going into a tough game in a tournament we have a proud history in and it would be fantastic to have the opportunity to finally get our name on the trophy. ”

The sides met three times last season in SWPL action, perhaps most memorable was the comeback in the Granite City in October.  Going into the interval two goals down, it was a proverbial game of two halves with a spectacular goal from Tricia McLaughlin and a double from Sarah Ewens dumping the Dons late in the game to finally win 2-3.

Aberdeen’s made it into the quarter finals at the expense of Inverness City, with the Reds having to battle for the 2-3 win.  Suzy, in her second season at Ainslie Park, knows that her team will have to be on top of their game to progress to the last four.  “The Aberdeen side are quite a physical and well organised outfit and it’ll be our first outing on a grass surface.  I expect it to be a tough, close game but one I’m confident that we’ll return down the M90 with our name in the hat for the semi-final draw.”

The Final will be played at Ainslie Park, an added incentive if any Spartans player needs one, to progress in the search for silverware.

Sunday’s match takes place at the home of Sunnybank Juniors.  Kick-off is at 14.00h.  Admission prices are £4 adults / £2 concessions.