Shepherd’s Spartans out to counter Ranger danger with a win 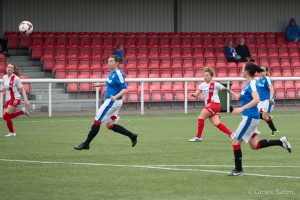 Spartans head to New Tinto Park on Sunday looking to cement their mid-table spot with a win over hosts Rangers in Round 18 of the inaugural SWPL 1.

It’s been a mixed bag of fortunes for both sides this season and in each of the East v West clashes to date, home advantage has prospered in narrow one goal victories.  Suzy Shepherd takes her squad across the M8 to break the cycle and her hopes have been boosted by the recent signing of Colette Cavanagh from Celtic.

Spartans pathway programme continues to bear its fruits and Shepherd has drafted teenagers Tegan Reynolds and Georgia Adderley into the travelling party.  The pair have been instrumental in the Under 17s achieving second place in their league and reaching the Scottish Cup semi-final this year.

Adderley’s call-up tops off an excellent week with the talented sportswoman selected for Pauline Hamil’s Scotland Under 17s squad for their UEFA Championship Qualifying Tournament in Edinburgh later this month.  The third match of the tourney takes place at Ainslie Park on Saturday 15th October v Croatia at 1pm.