Shepherd’s Spartans sparkle at the home of the Diamonds 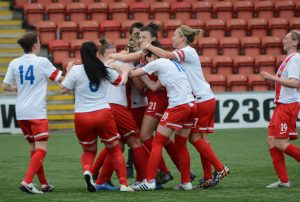 It’s almost two years since City last lost on league duty and history repeated itself at the same venue against the same opposition, a unique double for Captain Katie Reilly who saw her solitary strike separate the sides last time out.

It was the visitors who took the lead in the 13th minute when Alana Marshall’s powerful 20 yard free-kick stayed low to beat the wall and a wrong-footed Gemma Fay.

City almost responded with a goal of their own after Leanne Ross hit the crossbar following Jennifer Malone’s clearance off the line as the home side threatened to level proceedings at the earliest opportunity.

An almighty stramash of sorts in the away penalty area saw the Spartans onion bag lead a charmed life after a shot was blocked Jen Malone on the post. The defender didn’t appear to know much about it before turning round and hoofing it off the line before McCulloch could react for the tap-in.

On the half hour mark, Reushia Littlejohn made her way into the box despite the best attentions of Simone McMahon, only to find Cumings in fantastic form, with the kid keeper batting the ball away to safety. That save proved to be crucial.
Instead of finding themselves all square, just two minutes later, City were two goals down.

Kirsty McLaughlin’s audacious long range effort ten minutes before the interval saw the Scotland keeper off her line and there was little she could do as the ball found the net in off the crossbar.

On the stroke of half-time, there were muted appeals for a spot-kick from the City faithful after Crilly took a tumble in the box following a challenge with Simone McMahon.

City boss Booth rung the changes at the interval, with three replacements on as he looked to avoid back-to-back defeats against Edinburgh sides after losing the League Cup Final in midweek to Hibernian Ladies.

A couple of minutes after the restart, Louise Mason made way for debutant Sarah Clelland.

Whilst her gloves were proving to be the nemises of the City shooters, it was Cumings legs that were to thwart an effort from Fiona Brown as the sub raced in on goal.

Skipper Katie Reilly was unlucky not to put further light between the sides midway through the half when her header went agonisingly wide from a Marshall corner.

City continued to throw the proverbial kitchen sink at Spartans as they looked to claw back the deficit and set up a grandstand finish.

Then, with five minutes left on the clock, Sarah Clelland fired in a speculative shot-come-cross from out wide that appeared to deceive Fay and flew over the airborne keeper to nestle in the net.

Cumings continued to be the thorn in the City side, with the Scotland age-grade Internationalist pulled off a fine acrobatic save from Crilly.  The goalie’s clean sheet saw City fail to hit the net for only the third time since the league began in 2005.