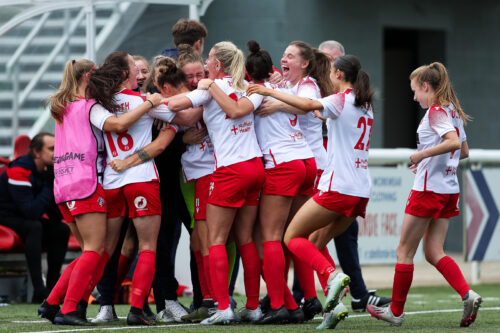 Hearts had the first half chance of the game, winning a free kick on the win, the resulting shot bounced off a Hearts hand and Spartans were awarded a free kick off their own.

Spartans immediately launched a counter attack of their own but no Spartans player could get on the end of Becky Galbraith’s cross. The end to end action continued as Harrison was called into action from a Timms shot from a Hearts corner.

Becky Galbraith had the first real shot of the game, her effort from the edge of the box just floating clear of  Parker-Smith’s left hand post.

The opener would come through captain Alana Marshall as her corner flew all the way into the net, as Parker-Smith caught the ball after it was already over the line, giving Spartans the lead in the 9th minute.

The first half played out in even fashion, Hearts got forward in flashes same as Spartans but neither team having a clear cut chance. Bates had a few promising driving runs down the left hand side but no goal action from either team. Marshall’s corner kick enough to send Spartans into the half with the lead.

Hearts started the second half the better side and instantly equalised through first half substitute McAllister. Her effort too powerful for Harrison in the Spartans net.

Spartans responded with a succession of corners. The closest attempt coming courtesy of Kat Smart as her headed effort goal ward was well blocked. Smart had another good chance shortly after, Galbraith sending her through on goal but her shot was again well matched by the Hearts defence. Galbraith would then have a chance of her own but her volley drifted over the bar.

Hearts were still looking threatening on the attack with Timms proving lively, she got through on goal and had Harrison all but beat, forcing a last ditch block from Nic Jameison to prevent the hosts taking the lead. Nothing to separate the teams after 90 minutes and the game went to extra time.

Hearts started the first period of extra time on the front foot, Spartans needing some last ditch defending from McCafferty as she followed Timms all the way to make the block. Spartans forced an attack of their own as Clelland made a driving run forward, her shot however was well met by Parker-Smith.

The best chance of the second period of extra time fell to Kat Smart following a Robinson delivery, the ball somehow bouncing out for a corner after the chance just a few yards out. The 120 minutes ended even and the game went to penalty kicks.

Hannah Robinson was first to step up for Debbi McCulloch’s side but seen her effort from 12 yards saved by Parker-Smith. Birse would follow up for Spartans after Heart’s score their first and respond with a goal to level the scores. Timms was first to see her effort saved by Harrison.

Each taker for Spartans would then prove clinical, with McQuillan, McCafferty, Douglas and Mason all finding the back of the net. As the shootout reached sudden death, Harrison stood tall to deny Rood from the spot and secure a spot in the quarter-finals for the visitors.