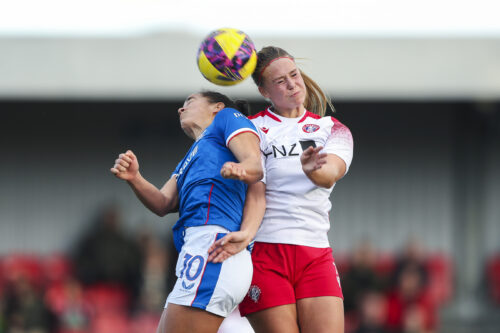 Spartans would see their cup journey end at the Semi-Final stage as Rangers ran out the winners at Ainslie Park.

Rangers enjoyed the majority of possession in the opening stages of the game and it would pay off for the visitors. A Chelsea Cornet strike from distance would catch out Rachel Harrison in the Spartans net to open the scoring.

Spartans were close to an immediate response to the opener. Marshall floated the ball into the box and Esson failed to punch clear. The ball just evaded Mason in the box and Rangers were able to get rid. Spartans continued to create, great play on the right hand side as Robinson and Mason linked up. Hannah’s resulting cross was well cleared by the Rangers defence. Spartans enjoyed waves of attack. The best of the chance fell as Robinson crossed across the face of the box but after a scramble the ball was cleared.

Rangers broke forward with pace and Kerr’s cross looked to have Harrison beat but Ross was there with an outstanding interception to keep the visitors from doubling their lead. Rangers would eventually double their lead as the referee pointed to the penalty spot, Galbraith judged to have pushed a Rangers player in the box. McCoy capitalised from the spot and the visitors would take a 2-0 lead into the half.

Rangers started the second half in similar fashion to the first. Again enjoying majority of the possession, Danielson would reap the rewards this time as she got on the end of Hay’s cross to tap home.

Controversy would soon follow. Esson comes a long 35 yards off her line and clatters into Mason, appearing to punch the ball in the process. A healthy Spartans support in the crowd baffled as the referee awards Rangers a free kick.

Rangers again attacked with pace through Hay on the right hand side. The winger proving too quick and again sending a ball across the face of goal leaving Arnott the easy task of tapping home for a fourth of the afternoon.