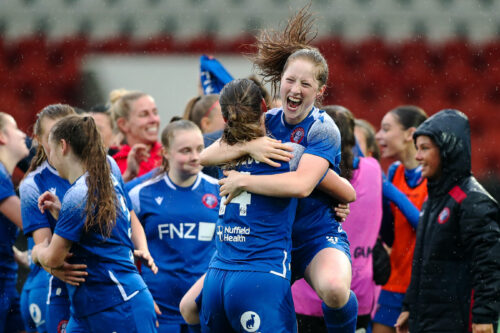 Spartans looking to reach televised Tynecastle final in the Sky Sports Cup as they face Rangers in the Semi-Final at Ainslie Park.

Spartans will be looking to reach the final of the Sky Sports Cup following a strong performance in the competition to date, having knocked out both Hearts and Celtic for their place in the Semi-Final.

Rangers themselves have put in a strong showing in the cup competition, last season’s SWPL champions defeating both Queens Park and Motherwell for their spot in the Semi-Final stage. The Glasgow outfit won both games 5-0 to progress.

It took penalty heroics from Rachel Harrison in the 2nd round of the cup, the keeper stepped up to make two penalty saves after an Alana Marshall effort wasn’t enough to secure the win for the away side in 90 minutes. The Quarter-Final stage would again see Debbi McCulloch’s side go all the way to penalties. Mason’s 90th minute equaliser was met by huge cheers from the Spartans travelling support. This time it would be centre back Robyn McCafferty to earn the plaudits as her penalty proved decisive to knock out the defending champions 4-2 on penalties.

This Sunday’s Semi-Final is a 1pm kick off at Ainslie Park and tickets are available to buy here.