Sky Sports Cup | Spartans travel to Oriam in Round 2 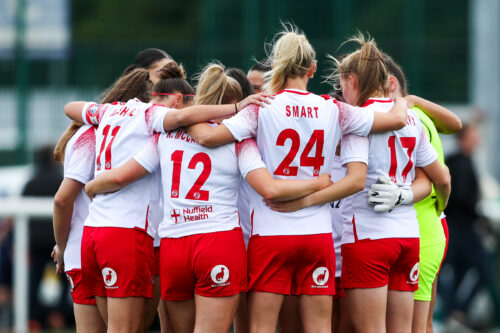 Spartans travel to Oriam this Sunday to face Hearts in Round two of The Sky Sports Cup.

When the sides last met in league action, it was Spartans who got the better of local rivals Hearts, winning 2-1. A winner from Becky Galbraith from an Alana Marshall corner sending Debbi McCulloch’s side on their way to the three points back in August. Spartans currently lie 5th in SWPL with Hearts narrowly ahead in 4th.

Hearts come into the game following a 2-0 loss to Glasgow City at Petershill Park. Spartans faced fellow Edinburgh side Hibs in the league with the game playing out as a two all draw, goals coming courtesy of Galbraith and Marshall.

Onto Cup action as both sides enter the draw in the second round as we transition to the new format, moving away from the group stage into straight knockout.

Last season Hearts bowed out of the competition in the group stage, with a win, a draw and a loss to their name this was not enough to progress. Spartans put in a strong showing in the competition, reaching the Semi-Final, progressing out the group stages and beating Glasgow Women and Dundee United on the way. In the Semi-Final, Glasgow City ran out 3-0 winners to deny Spartans a Cup Final spot.

The two Edinburgh sides haven’t met each other in cup action since way back in 2013 in the second round of the Scottish Cup. Spartans ran out 7-2 winners on that day.

This weekend’s game will take place at Oriam, 3pm kick off. Tickets are available through Hearts here. Nic Jameison previewed the fixture which is available to view here.