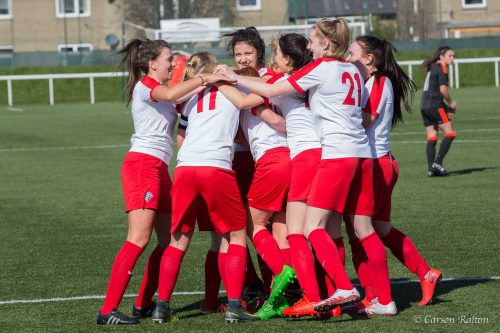 Spartans are through to the Semi Final of the SWPL League cup after an emphatic 4-1 win over Aberdeen at a sun-soaked Ainslie Park.

After celebrating her 100th appearance for the club last Sunday, Captain Fantastic Alana Marshall bagged a brace in a game that saw her side come from behind to score four second half goals without reply.

Zoe Johnstone drilled home to open up the Spartans scoring shortly after the interval after Bobbie Beveridge headed the ball into her path and whilst the home fans were still finishing their celebrations,  Marshall scored direct from a corner to take the lead for the first time in the match.

Spartans then extended their lead when Marshall slotted home a spot kick after Carla Boyce was taken out by Goalkeeper Emily Mutch.  Simone McMahon rounded off proceedings at the death when she latched on to debutant Kaela McDonalds goal bound shot to secure her side’s path into the hat for the semi final draw.